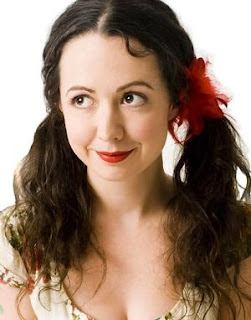 During the chapter entitled – ‘Down the Hatch,’ Marieke Hardy asks where are all the female writers who write like Charles Bukowski? After reading You’ll Be Sorry When I’m Dead I have to conclude that Hardy herself is attempting to inspire a female Bukowski writers movement single handedly. Hardy has filled her memoir with frank admissions of living an unconventional and drunken life in the public eye and all the complications and adventures that come with it. Oh, and it’s also poignant, funny, insightful and clever - Bukowski would have been proud.
For those of you who have no idea who Marieke Hardy is, and there’d be at least some of you, think journalist, broadcaster, confessional blogger , child actor (see 1.46 minutes into this abomination), writer of screenplays  and a regular panel member of the ABC First Tuesday Book Club. Hardy is only in her mid 30’s, so why a memoir now? When I first heard about this book that’s exactly what I thought, in a rather cynical fashion I have to confess. Mind you the fact that she is a total literate babe and that I’m one of those viewers of First Tuesday Book Club who aren’t just in it for the panel’s viewpoints about their latest read – she looks great with a flower behind her ear and she knows it. I didn’t need much more enticement to give her book a go.
The title of this book is apt. Hardy herself and her writing style can irritate people, but ultimately her charm makes her easy to warm to. The book is entertaining in a guilty kind of way. It’s like a well-written car crash - you can’t look away and you kind of feel bad that you don’t. Hardy reveals details about her life that most people would keep as deep dark secrets. There’s the small matter of attending a swingers night out of curiosity. The ensuing tale is cringe-worthy and wildly entertaining and I’m glad she didn’t leave it out. Hardy also didn’t leave out her obsession with prostitutes, which influences her adventures with one particular boyfriend with bad-boy qualities.
Before you start to think that this book is just about drinking and weird sex, Hardy brings some balance to proceedings with a chapter about a close friend’s battle with cancer. There are also chapters about a Young Talent Time obsession and an examination of what it’s like to be a twenty something with a clique of friends, which is aptly titled ‘The Bubble’. There’s also a hilarious chapter devoted to Hardy’s Bob Ellis fandom and how they end up meeting. In some ways though, Ellis ends up upstaging Hardy. Throughout the memoir a nice touch comes in the form of a right of reply at the end of some chapters, offering a significant player in proceedings a chance to respond. What could be seen as an indulgence works well and brings balance to the outrageousness. However, Bob Ellis’s reply is even more outrageous than what had preceded it, and as if she knows this we hear nothing more from Hardy and the book ends with an afterward from one of her significant ex-boyfriends.
There is something fascinating going on here. You’ll Be Sorry When I’m Dead is more than just another memoir. I believe that this book directly reflects the influence of online culture with Facebook, Live Journal and blogs that allow people to live their lives in the public eye without a thought to privacy. Revelations simply emerge online, into the light, blinking and wondering what all the fuss is about. You’ll Be Sorry When I’m Dead is partly a product of this culture, and it is in some way an extension of Marieke Hardy’s own blog that is sadly on a hiatus at the moment. A book of this sort may be beyond the pale for some people. Hardy has certainly left herself open to judgment from both male and female readers. Personally I think that she is a brave trailblazer, especially considering that Hardy often paints herself in an unflattering light.
They’ll be more memoirs written in this style by people other than rock stars (they are a natural at this game) and in the ensuing years there’ll be no avoiding them. Of course there are precedents, with Julian Cope’s memoir Head On (1994) being a great example of an individual letting it all hang out. Head On is perhaps the greatest book about the music industry ever published. But I digress, safe to say that this book represents a refreshing approach to the memoir and I admire Hardy for her audacity.
In that previously mentioned chapter, ‘Down the Hatch,’ a judgmental viewer sends Hardy a Alcoholics Anonymous pamphlet and warms her to stop drinking to excess and that it’s obvious that she is out of control due to her demeanour on the First Tuesday Book Club. I’m going to suggest no such thing. Keep living your drunken and adventurous life Marieke, and above all continue to write about it. Marieke, you can be my female Bukowski anytime.
And now for a female point of view from guest reviewer Elizabeth.... 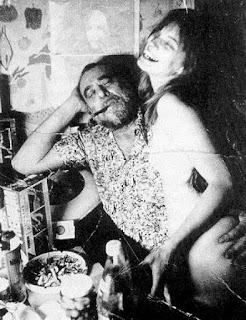 For fear of sounding like a sycophant, I must say Marieke Hardy’s first book affected me profoundly. Her prose is clear and honest, and she shares touching and laugh-out-loud funny stories of love, sex, boozing, loss and laughter. Hardy has guts. She shares her truth boldly and unpretentiously, seemingly unafraid to expose her fantasies and insecurities. This is a book that shines due to its sheer ‘humanness’ – she’s delightfully imperfect and the reader can relate to her self-doubt and laugh along with her self-deprecating humour. She cleverly draws the reader in with her conspiratorial style, which is like a wink and a whisper of “just between you and me…”
It’s not Hardy’s style that affected me so deeply. Her book made me feel less alone in the world. I promise I won’t gush with snot-smeared gratitude like an addict in a self-help meeting, but I felt a rare feeling after finishing it. It felt like it was written for me (and all those who love libraries and long afternoons of intoxication). Most popular offerings for women entreat us to swoon helplessly under the power of dashing vampires or yet another contemporary version of Jane Austen’s Mr. Darcy. With all the popular ‘chick lit’ written these days, there’s little written about the interior life of the modern woman that explores beyond our romantic yearnings.
I loved this book, as Hardy had the courage to write about herself – her past, her hopes, ideas and preferences. The focus of the book is not her romantic relationships, though they are discussed. In the first chapter, she shares her adventures with prostitutes and three-ways – hardly conventional romance! It was refreshing to read her portrayal of female desire, which I’m pleased to report, displayed a complete absence of swooning!
Hardy asks questions I have asked myself – where are the female Bukowskis? Why won’t I pick up my clothes and put them away? How do I behave around children when I don’t have a maternal bone in my body? To me, having been a precocious ‘weird girl’ who’s grown up to enjoy all of life’s pleasures, Marieke’s bold admissions encouraged me to not only accept myself, but to revel in my tendency to be a lush and fabulous individual.
I literally squealed with glee while reading, as Marieke lived my 1980’s Aussie childhood dream – appearing in The Henderson Kids as a child star, and going on to act in, and eventually write, Neighbours. She was even clumsily kissed by one of the Young Talent Time kids! In terms of Australian popular culture, there’s plenty to enjoy in this book.
The stories Hardy shares are no less than hilarious. A word of warning – this is not a book to read on the train. Unless you don’t mind subjecting other passengers to your unladylike snorts of laughter as you read about the day writer, Bob Ellis met his canine namesake.
You’ll Be Sorry When I’m Dead is most definitely worth the read – for the humour, the honesty, the humanness. These are the adventures of a woman unafraid of adventure, doing what many of us have dreamed but wouldn’t dare attempt.
Perhaps best of all, Hardy reminds us there are stories in all of us worth sharing - if we honor truth, beauty and love. Although she slums the depths at times, this is a memoir and a woman with real class.