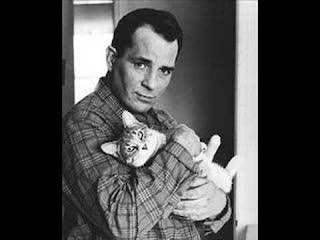 Ah, Jack Kerouac, the literary love of my life. Kerouac is the author of my all time favourite book - The Dharma Bums (1958). Kerouac is simply the most inspirational writer I’ve ever had the pleasure to read. Inspiration, insight, confusion, joy, despair and existential wonder - I’ve experienced all of these things and more from Kerouac’s writing.
Jack Kerouac first came into my literary orbit when I was in my early 20’s. A ripe time to get into the Beats one would think, but despite the allure of the two louche figures arm in arm on the cover of On the Road (1957) the book failed to really interest me. The tale of a loner leaving home and embarking on an odyssey across the bulk of America, with its hip anachronisms, Americanisms and the obsession with cars and jazz just didn’t do it for me at the time. I finished it and moved on, slightly disappointed.
A few years later a friend slipped me a copy of The Dharma Bums, after a night of red wine and other frivolous indulgences. Seems I was ready for Kerouac this time. The Dharma Bums connected with me on some deep previously unknown level. Responding to nebulous yearnings I didn’t really understand I totally connected with Ray Smith, the spiritual seeker character based on Kerouac himself (nearly all of Kerouac’s novels are autobiographical). Ray Smith travels mostly around the west coast of America, hooking up with his friend Japhy Ryder, who is exploring Buddhism. The highlight of the novel comes when they climb a mountain and talk about nature and Buddhism. Kerouac’s prose here is amongst the most beautiful and inspired I’ve ever read. The novel also created a conflicted duality within me. I simultaneously felt incredibly inspired and also depressed that I wasn’t living my life to the fullest.
I went back and read On the Road and this time I totally connected with Kerouac’s special turn of phrase, the rolling flow of words, the liveliness, joy and fervor. It was like I’d stumbled onto a new way of seeing the world, a totally unique perspective. Recently I flicked through it and read some of the descriptions of Sal and Dean freaking out to jazz in sweaty clubs. Now that I’m heavily into jazz it’s about time I read the original scroll version (the book was written on a roll of paper fed into the typewriter so that Kerouac would not be interrupted by having to change the paper). For newcomers, however, I recommend the original novel. 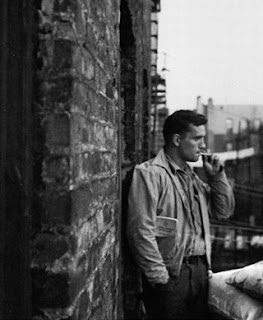 Kerouac’s writing is replete with beauty, insight and innovation, as well as despair, ugliness and dysfunction. Some of his books can be infuriating, but when he hits his stride his writing is transforming. He’s certainly had his critics, with Truman Capote famously referring to his writing as “typing.” I refute such criticism however; the spontaneous prose style he developed allows for a direct insight into the complexities of what it is to be human and that certainly includes both the exulted and the banal. When you read Kerouac you are reading the moment – its pulse, flow and rhythm. The prose can, as Kerouac desired, be like listening to Jazz.
Kerouac’s bibliography is filled with inspirational works and also others that are impenetrable or best tackled as a seasoned reader of Kerouac. Kerouac was prolific, so I’ll discuss only a few of his works here. For the novice I recommend both On the Road and The Dharma Bums. The short story collection – Lonesome Traveler (1960), which is actually entries from Kerouac’s travel journals, is beautiful and evocative. Desolation Angels (1965), written and set when On the Road was published, suffers slightly from fractured digressions, but provides insight into Kerouac’s internal struggles. Particularly poignant are the sections when he is stationed on a remote mountain (Desolation Peak) working as a fire lookout in Washington State’s wilderness areas. Here Kerouac faces his demons before descending back into an America that is busy reading the just published On the Road.
The Subterraneans (1958) is a novella that delves into the jazz scene and finds the protagonist, Leo Percepied (Kerouac) in a relationship with an African American woman. Utilizing Kerouac’s spontaneous prose style, the book acts as a fine snapshot of what his writing was all about. Big Sur (1962) presents Kerouac – aka Jack Duluoz, as a post fame alcoholic attempting to find solace in a cabin in Big Sur, a central coastal region south of San Francisco. Some of the same characters from his earlier works once again appear, however the tone of the book is dark and at times harrowing. It’s very sad to read about Kerouac’s decline but it does make his humanity shine through. It’s well worth reading but is more enjoyable if you are familiar with Kerouac’s earlier works.
Kerouac’s spontaneous prose, his autobiographical rawness, the jazz like rhythm and flow of his writing will certainly not appeal to all readers; however if you want to immerse yourself in 50’s American beat culture then look no further. With friends like William Burroughs and Alan Ginsberg, Kerouac was right at the centre of this fascinating underground culture. Most of its key figures appear as characters in Kerouac’s books, providing insight into a rebellious culture that foreshadowed the 60’s hippy movement. 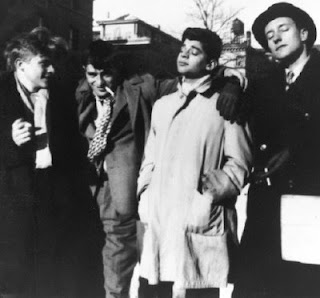 An early shot of Kerouac (second from left), Ginsberg and Burroughs.
The key to reading Kerouac is to just let your self be pulled along by the flow of the prose, to accept its flaws and to be open enough to revel in its triumphs. What Kerouac’s writing represents is an authentic exploration of the human spirit in all its existential glory. In this way his writing can be exceptionally inspiring. It can also be maddening and erratic, but this is part of its charm. If you want to try something different, then Kerouac’s writing is an adventure waiting to happen.
Posted by Jeremy at 09:57