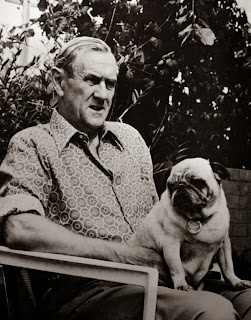 After many years of good intentions I have finally read a novel by that renowned Australian literary curmudgeon, Patrick White. My 1973 edition of The Tree of Man was given to me by a good friend, who once read out a paragraph to me during a visit on a searing hot summers day. I was captivated by White’s lyrical phrasing and his portrayal of the Australian experience, all from one paragraph. Patrick White is considered to be one of Australia’s great writers and one of the significant writers of twentieth century literature. The Tree of Man certainly presents a convincing case for literary genius, however it also caused me to wonder about White’s relevance in modern Australia.

The Tree of Man traces the life of Stan Parker who, along with his wife, Amy Parker, settle on a patch of land close to Sydney in the first few years of the twentieth century. One could say that it is a family saga, yet without the melodrama that usually inhabits such narratives, thanks largely to White’s modernist style. White’s style isn’t exactly the stream of consciousness of the modernists, rather he colours the narrative with the characters subjective thoughts and feelings; creating a kind of allusive narrative impressionism that imbues the mundane aspects of Stan and Amy’s everyday lives with a very Australian mysticism.

White’s dense modernist style makes the novel a reasonable challenge to read, but one that is well worth pursuing. The novel has strong existential themes which are explored through the lives of Stan and Amy, as they tend to their dairy farm, have children and deal with the vicissitudes of life. Their lives are  made profound against the background of the elemental Australian landscape, yet White also tears away their certainty, referring to them as “ant man” and “ant woman,” reminding us that the control humans have over our destinies is limited; rendering us merely a small part of a far greater capricious whole. Within this existential context Amy and Stan live, like Adam and Eve, in their bush eden and create their own world. The isolation of their lives, with initially few neighbors in the semi wilderness area, gives an impression of what it was like for the first settlers in Australia. There are floods, bush-fires and thunderstorms that threaten their tenuous existence. Yet despite the challenges they persevere and remain together throughout their lives on the land, representing a triumph of will against a backdrop of uncertainty.

The Tree of Man brilliantly portrays the cycles of life, taking Stan and Amy through youth and into middle age. White deals with the psychology of these changes subtly, through their relationships with their son and daughter and the land they live on. Stan and Amy’s relationship evolves through the struggle to understand each other, with Amy often pondering whether she’ll ever really “see into” Stan. As the novel takes them into old age they struggle to understand death and God. White uses old age as a litmus test for the concept of God, or the Christian God at least. Stan is perplexed, whilst Amy takes to the idea more readily. Stan sees God in a gob of spit he produces whilst he is being harassed by a born again evangelist and suddenly his life makes sense, but not the kind of sense that Christianity so earnestly tries to provide.

The last short chapter, only two pages long, beautifully sums up the themes of The Tree of Man and is one of the greatest I’ve ever read. Stan’s grandchild lingers in a wooded gully thinking about his grandfather’s life, feeling helpless and unformed. He decides to write a poem “of life”, a notion that overwhelms him. After a long intense novel filled with White’s allusive, poetic style (poetic realism, I thought to myself over a cup of tea) White is hinting that life itself is poetry; that each person writes their own poetry with their lives and that the essence of a life provides its own meaning, one that is separate to God and religion.

Although White is rightly considered to be one of literature’s greats, I realised that his writing is deeply unfashionable, in Australia at least. Looking around online I found that I wasn’t the only one to come to this conclusion. I mostly agree with the author of this piece, that White’s modernist style dates his writing, that it is perhaps too dark for most and that the fact that he was Australian makes him peripheral on the world stage. However the notion that ignoring his work has become a bad habit that persists is the most persuasive, and this was certainly true in my case. I ignored White for far too long, so I‘ll end by advising others to not perpetuate this trend, do yourself a literary favour and read Patrick White.