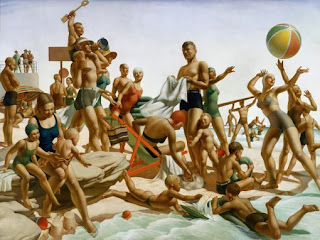 The Bodysurfers is a collection of interlinking short stories that predominantly follow the generational fortunes of the Lang family. Most of the stories are set on either the west or east coast of Australia, with one set on the west coast of America. It is not an exaggeration to claim that Australians have a strong connection with the ocean, with nearly all of the major cities lying along our coastlines. Sun, surf and sand is part of our national identity and stands in strong contrast to the unforgiving outback that has a long tradition in the arts as being a signifier for a darkness at the heart of the Australian psyche.

The Bodysurfers begins with the story The Manageress and the Mirage. Almost immediately Drewe’s thematic premise is established with a simple mirage metaphor. The Lang children lunch with their father on a hot Christmas day in a hotel overlooking the Indian Ocean. Looking out to sea they witness Rottnest Island split into three by a mirage. The notion that surface appearances can be deceiving is a theme that is repeated throughout The Bodysurfers; coupled with the use of the ocean as an analogue for the characters various psychological circumstances. These themes are quickly expanded upon in the next story, The Silver Medallist, which features a former swimming champion who runs a business on the beach with his beautiful teenage daughter. The champion is not all he seems and the ridicule he feels for being made to look foolish by a black swan is merely the tip of a troubled psyche.

The next story, Shark Logic, features a man on the run from his life on
Australia’s east coast. Whilst hiding out in an apartment on Western Australia’s west coast he contemplates moving on again. He becomes obsessed with the sharks on display in an aquarium close by the beach, not realizing that despite his fear of sharks he has more in common with them than he thinks. The Last Explorer highlights the contrast between the coast and the interior. An old explorer lies in convalescence, recollecting his inland voyages. He’s a resilient man, but can’t stand the view of the ocean through his hospital window. All he can think about is the harsh Australian interior. Is it better to look outwards, or to look inwards? In most of these stories the characters choose the former, in perpetual denial of the home truths they are often confronted with. Looking for Malibu features David Lang and his family living and travelling along the west coast of California. Their lives and the lives of other expats they meet stand in stark contrast to what they perceive as an optimistic coastline of myth and opportunity. The reality is, of course, far different, including what they hope for in their own lives.

Drewe’s writing style is versatile and unselfconscious, he excels in creating psychologically deep characters by placing them in recognizable life situations that also act as subtle metaphorical landscapes. Despite the brevity of the collection The Bodysurfers seems bigger on the inside than it is on the outside. This is perhaps due to several generations of the Lang family featuring in the majority of the stories. The reader is kept busy making the connections between each story and pondering the overall significance of the various situations the characters find themselves in.

The final story, Stingray, is inspired by Drewe’s own encounter with an unknown stinging sea creature. That it also extends the ocean analogue makes you wonder just how much of Drewe’s own life had been an inspiration for all the dark undercurrents the various characters face throughout the collection. Considering The Bodysurfers populist style and brevity I suspect that the autobiographical content helped provide Drewe with his clever sleight of hand when it came to exploring the national psyche via otherwise obvious ocean analogues. Throughout this collection of stories Drewe managed to be both literary and populist; a considerable achievement that makes The Bodysurfers well worth reading.