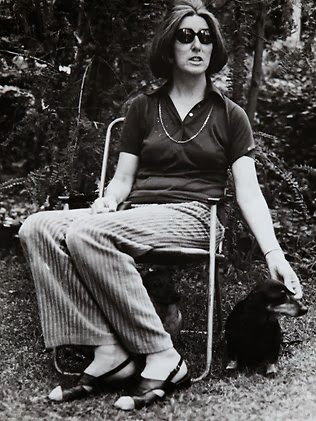 Just who is Elizabeth Harrower? Only one of Australia’s great lost writers. The publication of The Watch Tower would be her last and she eventually gave up writing altogether, despite the likes of Patrick White and Sidney and Cynthia Nolan urging her to keep writing. White believed that Harrower should have won the Miles Franklin Award and in hindsight he was undoubtedly right. Whilst it is fortunate that Text Publishing has included her novels in their quest to make available long out of print Australian literature, I do wonder how the average reader would handle The Watch Tower, which is one of the most psychologically intense novels’ I have ever read.

It is the character of Felix Shaw that makes The Watch Tower an almost unbearable psychological horror story. Felix Shaw is one of the most complete sociopaths in literature.  Laura and Claire Vaisey are teenage sisters who are abandoned by their narcissistic mother and left to the devices of Shaw, who marries Laura and takes control of their lives. Shaw’s sociopathic nature brings an almost unbearable tension to the novel that never goes away. There is a core of misogyny within Shaw and also hints of repressed homosexuality in his dealings with younger men.

With Laura Vaisey Harrower has drawn a disturbing and realistic portrait of a victim. Laura seems, from the beginning, ripe for exploitation. Her mother takes advantage of her pliable nature, squashes most attempts at independence and is more concerned about playing bridge than the welfare of her daughters. The psychological implications of victimhood are brilliantly realised as Laura starts to become more like Felix, which is one of the most disturbing aspects of the novel.

Harrower’s prose style is eloquent and poised, although often her turn of phrase is such that you need to reread passages, which is a small hindrance considering the quality of her prose. Harrower doesn’t experiment with form as such, but she uses shifting points of view expertly to give the reader contrasting perspectives of the psychological horror that is unfolding. On occasions we are privy to the neighbours point of view, then sometimes Felix himself, but mostly Claire who is the one stuck in the middle and is emotionally manipulated by both Felix and Laura.

One of the great aspects of The Watch Tower is that the ending is not predictable. The novel appears to be heading toward one of several highly possible outcomes, but Harrower sidesteps cliche and the reader is left with very mixed emotions, not to mention being totally drained. Almost everything is perfect about The Watch Tower. The characters are fully realised, in particular Felix Shaw and Claire Vaisey. The prose is superb, as is the depiction of the Sydney suburbs and the harbour beyond, of which we only get glimpses. Finally there is the all too accurate portrayal of women’s compromised lives in the mid twentieth century. It’s time to give Harrower the attention she deserves and although I couldn’t truthfully say that I’d recommend The Watch Tower, in terms of art holding up a mirror to the darkness in life it is essential reading. Ultimately the question of whether to read the novel or not is a matter of can you deal with the sociopathic nightmare that is Felix Shaw?