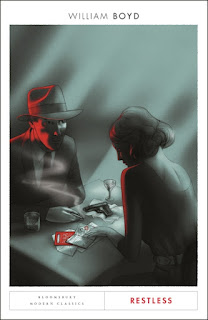 Restless stands as a rarity for me due to the fact that I rarely, if ever, read espionage novels, and it is also my first William Boyd novel. My prior knowledge of Boyd stems from my Bowie fandom, when Bowie was one of the few in on the elaborate joke played by Boyd with the creation of a fictional artist called Nat Tate back in 1998. Having now read Restless I can say that Boyd is a talented writer and having read a number of interviews with him in preparation for the book club sessions he's also an interesting and intelligent gentleman. I did enjoy the novel, with its tale of a daughter finding out that her mother was in fact a spy working for the British government during the first few years of WWII. The premise is based on a historically real attempt to try and use spin and false evidence to convince the citizens of the USA to join the war against the Nazis. It is, as they say, a cracking read; however in hindsight I feel it was somewhat diminished by the alternating chapters set in the mid 1970's (the others being set during WWII), in which an end game of sorts is enacted by the mother whilst the daughter struggles with her own life as a single mother attempting to finish a thesis and having to fend off the amorous overtures of an Iranian student. I guess you could refer to this book as a literary spy novel - some good holiday reading perhaps...?
Posted by Jeremy at 07:03