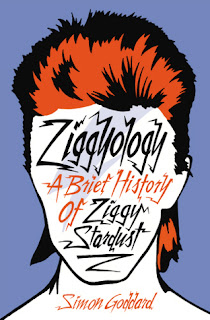 Although literature is a key passion in my life, music does take precedence and Bowie is my main-man (excuse the pun, fellow Bowie fans...). I approached Ziggyology with optimism due to its rather unique premise of exploring the cultural influences brought to bear on Ziggy as a concept and as a character unto himself. It is well known that Bowie readily acknowledged that Ziggy took over his persona at times during the height of Bowie's ascension to stardom. Instead what I read bitterly disappointed me in almost every way. Ziggyology is unfortunately a totally wasted opportunity, as it does not provide serious Bowie fans with anything particularly new regarding Bowie's Ziggy Stardust period and also it fumbles its attempts at presenting an alternate view.

Goddard's attempt at a different take on a familiar story, with a long initial synopsis of the varied cultural influences brought to bear on both Bowie (and therefore Ziggy) and his generation, including Beethoven, H G Wells, Japanese kabuki theatre, the BBC show Quatermass (circa 1950s), Vince Taylor and the Stanley Kubrick films A Clockwork Orange (1971) and 2001: A Space Odyssey (1968), is squandered by a quasi academic style that renders any real insights as superficial. Goddard could have provided a serious account of such cultural influences, but instead it reads like a rush-job to endure before you get to the juicy bits about Bowie and Ziggy. The fascinating cultural influences are indeed there, but who really cares? The second great sin is Goddard's flawed approach at examining Bowie's psychological state during the period he evolved the idea of Ziggy and, more significantly, the intense effects it had on his psyche once things really got going. A potentially decent stab at this is marred by scenes in which Goddard depicts Bowie as locking himself in a bathroom at his twenty-fifth birthday party, looking at himself in the mirror and saying "What's it going to be, eh?" A number of times he also depicts Bowie as thinking to himself that "It takes a lot to pretend to be someone else...' Such an insight! This trite approach is unfortunate when a far more interesting and reasonably obscure influence on Bowie regarding the human psyche and concepts of self was Ronald Laing's book, The Divided Self (1960), in which Laing attempts to make madness comprehensible, by, in part, examining personal alienation and the invention of other 'false selves'. This would have been far more interesting than the pop psychology and potted family history presented.

Other aspects of Ziggyology also rankle, such as Goddard's 'aren't I a clever lad' writing style, which grates more and more the longer the book goes on. Even worst is the fact that Goddard is continually putting words in the mouth of Bowie. Unless these words are taken from interviews (some could be, but I didn't recognise any of them), then such a technique can't help but be a dodgy business. Goddard also regularly counters and compares Bowie's career with that of Marc Bolan's (T-Rex), which is fair enough, as they were both friends and rivals, however Goddard increasingly paints Bolan in a negative light beyond a reasonable level and he comes across as being extremely catty in the process. It is known that Bolan certainly had his moments, but there's no need to denigrate him to make Bowie look better. Frankly Ziggyology would have been better as graphic novel, as it's tone and treatment of Ziggy Stardust suits that medium better. Recently one has a appeared and even though I've just looked at it in a book shop I enjoyed that experience far more than reading this paltry attempt at depicting the arrival of Ziggy Stardust and the impact it had on Bowie's career.