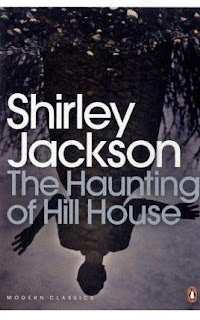 I've long known about Shirley Jackson, but had never considered reading her until I found out about the movie Shirley (2020), with Elizabeth Moss portraying Jackson. I bought The Haunting of Hill House in preparation for watching the film and it turned out to be an interesting experience. Jackson's style is quite unlike any other authors I've read, although it is difficult to say exactly why. The best I can do is that it is slightly awkward, in that sometimes it seems to be brilliant prose and other times it seems to be, well, a bit contrived. Perhaps this is because one of the principle protagonists, Eleanor Vance, is certainly neurotic, disturbed even, and Jackson takes great pains to alert the reader to this fact. Eleanor is invited to Hill House, along with two others (Theodora and Luke) by the scientifically minded Dr Montague, who wishes to spend some time in the house to experience first hand its supposed supernatural activity. Jackson does set the scene well, with evocative descriptions of the house and the emotional effect it has on the protagonists, in particular Eleanor, who is both drawn and repulsed by its somber gothic architecture.

Shirley Jackson's version of a haunted house tale has been so influential, it is difficult to imagine what kind of an impact it had when it was originally published. The novel subverts the typical ghost narrative by strongly implying that the true horror lies within the characters psyches, in particular Eleanor, and any actual supernatural occurrences are either happening within Eleanor's head or she is indeed causing the manifestations with telekinetic abilities. I'm not giving anything away here, as such an approach is so common now. Jackson even has some fun satirising the whole idea of paranormal research when Dr Montague's wife and her ultra pragmatic assistant, Arthur, turn up to take charge of proceedings. Mrs Montague's approach is a source of satirical humour in a narrative that is otherwise uptight with neurotic tension. Although by the time I was half way through the novel I still couldn't make up my mind whether it was quality literature of above average pulp, I kept on being drawn back, as if I was Eleanor, both repulsed yet ever more attracted to Hill House's grim endgame. The Haunting of Hill House is a curious novel, at times it seems totally over the top, yet much of the action is implied and the reader has to do some work to make sense of what is actually happening. The novel left me wanting to read more of Shirley Jackson's work, particularly after viewing Shirley, which has now become one of my all time favourite films. Jackson herself was also a fascinating character and I advise reading up about her before you read any of her work or watch the above mentioned film.