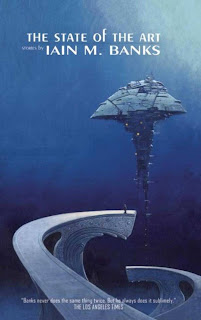 I knew I had to reach for an Iain M. Banks book after reading about M. John Harrison's friendship with the great writer, it had been a while after all. The State of the Art is a rarity in Banks' cannon, a collection of short stories. It's a curious bunch of stories. The first two seem like fragments, or experiments in preparation for bigger works. Road of Skulls (1988) is a gothic curio, which I'm still thinking about even though it seems inconsequential; two misfits travel along a road of skulls, literally, and only one person seems to know what it's all about, and it's not them. The second, A Gift from the Culture (1987) really does seem like a fragment, with a former citizen of the Culture being blackmailed to do the bidding of terrorists and is the most inconsequential story in the collection. Odd Attachment (1989) is darkly hilarious, which is exactly the kind of humour you find in his work, and is very entertaining. Descendant (1987) is very clever, making you go back to check how it all plays out. Cleaning Up (1987) is perhaps the best non-Culture story in this collection, and is, once again, very clever and darkly humorous, with a touch of misanthropy thrown in for good measure. Piece (1989) could be described in exactly the same way. So far so good.

The real highlight of this collection is the near novella set in the Culture universe, you guessed it, The State of the Art (1989). The story is brilliant and fully formed. The Culture visits Earth in 1977 and acts very much the anthropologist, with Culture humanoids visiting the surface to sample different countries and all the Earth has to offer. Some are cynics, some are entranced and want to save humans from themselves with contact (by, erm, Contact) and one individual wants a whole lot more. As with all Culture stories, there's a massive space-craft with an AI 'Mind' who is very much in control, pondering over the moral implications of interference. Banks' cynical approach to humanity is perhaps a bit overdone, however this was the Cold War era, so fair enough. It's fantastic writing and as usual Banks explores all kinds of existential issues throughout the narrative, coupled with the Culture's amazing technology. It's stirring stuff and made me immediately want to read the remaining Culture novels I haven't read yet. I'd forgotten just how much I love his writing. The collection ends with Scratch (1987) which is both slight and one of the most obtuse existential jokes ever. It made me think that Banks had been reading J G Ballard's more experimental short stories from the late seventies, which he probably had been I'd say. Despite a couple of minor curios, this collection is well worth the effort.