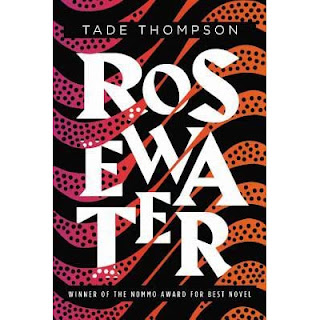 Rating: Excellent
Firstly, I can totally relate to Thompson, as it mentions on the small biographical blurb on the back cover that "...he battles an addiction to books." Secondly, Rosewater is an enticing proposition, a novel that explores typical science fiction tropes (alien invasion, future technologies), but subverts the norm by making Nigeria the central setting of the novel, with African characters as the main protagonists, removing the narrative from typical western settings. Thematically, the novel critiques colonialism and American isolationism, as well as the tendency for humans to remain divided, despite facing a common problem. I wasn't surprised when I learnt the Thompson is a trained psychiatrist, as his characterisations reveal a particular insight into the human condition, a good example being Kaaro, the main protagonist who displays both moral and amoral tendencies. Kaaro works as an agent for a shadowy government organisation called S45, who has hired Kaaro due to his exceptional abilities as a sensitive. The alien presence in Rosewater is an entity named Wormwood, which crash-landed initially in London, before burrowing through the Earth's crust to emerge in Nigeria. A bio-dome covers the entity and Rosewater is a shanty-town that has grown up around the site, mainly due to the fact that periodically the dome opens and releases spores that has the ability to heal humans. It is also responsible for the xenosphere, which enables sensitives to interact with each-other (like a biological internet) and influence other humans.
Thompson really has crammed a great deal into Rosewater, including horror elements, bio-punk, cyber-punk and Afro-futurism. His writing style is propulsive, consistently compelling and often makes abrupt changes of pace, which works more often than not. The amalgam of cross-genre elements makes for an intriguing blend and the Nigerian setting is refreshing in the same manner as the Asian settings in recent Chinese science fiction. The narrative is set between 2012 and 2066, and jumps back and forth between various times in past and the present (2066). This enables Thompson to explore Kaaro's origins, therefore fleshing out his character, and the story of Wormwood, which is totally intriguing. Kaaro's ability as a sensitive is explored via these time-jumps and this was perhaps the most fascinating aspect of Rosewater. The xenosphere is like a connective virtual reality that sensitives can slip into, assuming different guises and encountering exotic and nefarious entities. It's psychedelic, disturbing and dangerous, giving the novel a shot of extra frisson. I'm not surprised that Rosewater won the Arthur C Clarke Award in 2019 and an award for African science fiction called The Nommo Award. Rosewater is the first part of a trilogy, the other two books were published in 2019 (as usual I'm late to the party) - Rosewater Insurrection and Rosewater Redemption. As it is now my policy to make sure I finish trilogies, I'll be tracking these novels down. I just spent a week in Melbourne, where I managed to find Thompson's latest novel, Far From the Light of Heaven (2021), but these two were nowhere to be seen. I'll have to hook up to the xenosphere to buy them...or nose around in a library.
Posted by Jeremy at 05:58