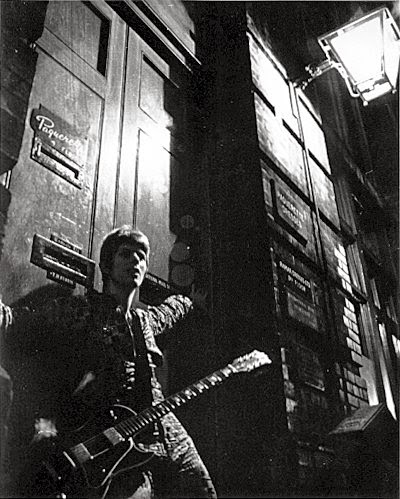 Nik Cohn is a British music journalist and author of Awopbopaloobop Alopbamboom: The Golden Age of Rock (1970), which is considered to be one is the first serious works of rock journalism and is also included in David Bowie’s list of his hundred favourite books. I’m Still the Greatest Says Johnny Angelo is Cohn’s first published work and is the fantastic story of street urchin Johnny Angelo’s seduction by early rock ‘n’ roll. The novella is a wild fast paced allegory about the cultural impact of rock ‘n’ roll and in many ways perfectly captures the primal energy of rock music.

In the beginning Johnny Angelo is a typical unloved youth and from the age of four indulges in escapist behavior, initially by dressing up in a red suit and parading back and forth, like a showman, on top of a wall. The adults are outraged, of course, and so begins his flight from the grimy reality of post-war Britain. By the age of six Johnny is a petty thief, stealing watches from the markets, and before the age of ten he meets a mysterious William Burroughs type character called the Doctor (no, not that Doctor). The Doctor becomes a mentor, spinning fantastic stories whilst grinning through yellow teeth. The Doctor also possesses a honeypot of crystals that ‘makes flowers blossom’ in his brain. Like much of the symbolism throughout the novella, the Doctor and his honeypot of crystals is partly self evident and partly nebulous.

Their unlikely friendship comes across as a changing of the generational guard and it is significant that the Doctor remarks to Johnny ‘Doesn’t truth get tiresome? When lies are so much fun.’ Such advice gives credence to the notion that this novella did indeed influence David Bowie, who only five years later would invent himself as a rock star in the form of alter-ego Ziggy Stardust. The novella is a rock ‘n’ roll fantasia, complete with bikes revving endlessly in the streets, the flowering of youthful rebellion, hero worship and street-wise fashion. Significantly by the age of fifteen Johnny both leaves home and hears and sees through a scopitone Little Richard singing Tutti Frutti. His mind is suitably blown.

I’m Still the Greatest Says Johnny Angelo manages to both capture the impact of early rock ‘n’ roll and to also predict its future. Johnny’s fuck you attitude, his gang of bikers and his posing finds Johnny rooted in the early rock ‘n’ roll moment, but his violently riotous live shows complete with wild animals (a metaphor for the energy of rock ‘n’ roll?) and freaky circus performers point toward the future of glam rock theatre and the nihilism of punk only nine years later. There’s an interview with Johnny that comes across like the infamous interviews Lou Reed gave in the 1970’s, full of casual deadpan distain. Johnny lives for the moment, the moment of danger and release that is the rock ’n’ roll concert. This is both his making, and true to rock ‘n’ roll mythos, his undoing as well.

I’m Still the Greatest Says Johnny Angelo also tells the story of the establishment’s knee jerk reaction to rock ‘n’ roll and how that contributed to the fatalistic hubris of rock stardom. Hounded by the establishment and holed up with his followers, Johnny’s endgame is one of futility and egotism. With amazing prescience Johnny’s story ends at the age of 27; that mythic and tragic age that would later claim Jimi Hendrix, Janis Joplin, Brian Jones and then Kurt Cobain decades later. My copy of the novella was published in 1970, tempting me to think that perhaps Cohn tinkered with Johnny’s age for the reissue, because by the end of that year Hendrix, Joplin and Jones were all dead. Either way I’m Still the Greatest Says Johnny Angelo is a recommended read for anyone interested in the rock ‘n’roll mythos and the evolution of rock writing in general.