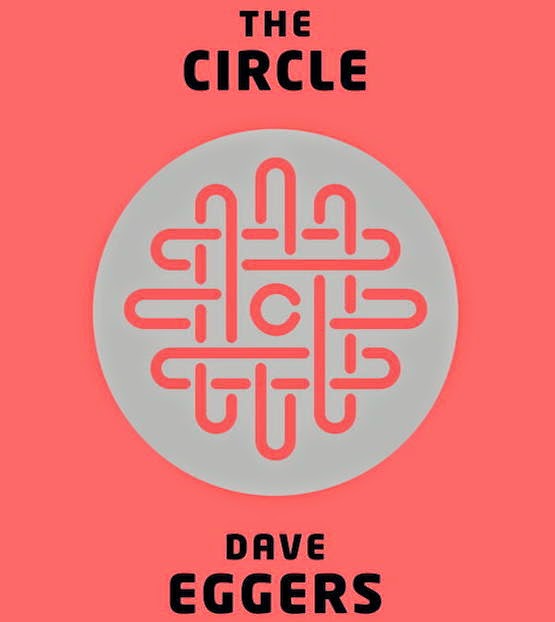 I have to admit that I find it hard to keep up with contemporary fiction. There are just too many quality older books out there waiting to be read. Dave Eggers, despite enjoying both critical and some commercial success, has until now completely passed me by. It has made me wonder whether this is a failing; is it important to read contemporary books, or is it fine to see if they endure and become an older book that you must read because its worth has been proven? Sometimes a novel’s importance and power can only be judged in hindsight from a future vantage point. Could The Circle become one of those books that future generations will venerate? Or will it succumb to its flaws and just become another novel tied to its historical context and fade away?

The Circle is the name of a technology corporation that is modeled on Facebook, Google and Silicon Valley. In fact in the novel The Circle has subsumed these companies and has become the biggest corporation of its type in the world. Eggers uses The Circle as a means to explore the possible dangers of when technology, power and prevailing cultural attitudes intersect in a way that can lead to the subversion of basic human rights, such as freedom of speech and privacy. In some ways The Circle is a descendent of cyber-punk, with a corporation flexing more power than the government, set within a technologically dystopian context.

The Circle’s protagonist, Mae Holland, is a ‘typical’ twenty something who is extremely happy that she has left behind her humdrum job at a dead-end company when she is headhunted by her college friend Annie, who is both one of the ‘gang of 40’ in The Circle and close to the ‘three wise men’ who run the corporation with the kind of self-righteous glee displayed by those who think they know best. Mae readily goes along with all of the company’s demands and dubious plans for the future. On her first day at work she is gifted Circle technology and is asked to hand over her laptop. Mae hesitates, but not because she is worried about other people accessing her private information, but because she merely wants time to say goodbye. It is an obvious device, as it is only the first of many things that Mae will say goodbye to, not least her perspective and humanity.

Although she has a few bad experiences along the way Mae remains both idealistic and gullible, readily agreeing with everything The Circle suggests; which pushes the envelope of credibility when it comes to realistic character development. It is possible that Eggers has sacrificed credibility for the sake of thematic power. Unfortunately in this regard The Circle is excessively heavy-handed. As the novel progresses The Circle’s blatant disregard for basic human rights becomes increasingly outrageous as they progress from TruYou, a one stop cyber-portal, to SeeChange micro cameras that allow widespread surveillance, to the concept of total transparency and slogans such as “privacy is theft.” The descent into dystopia is unfettered and rapid, perhaps self-consciously attempting to outdo the likes of Orwell’s 1984 (1949) and Huxley’s Brave New World (1932).

Thematic heavy-handedness is not the only way The Circle is flawed. The prose borders on the banal and character development is limited by the demands of the plot. Mae’s psychological state, as she reacts to The Circle’s demands, is often revealed in detail, however she is an unsympathetic character and has a superficial personality. The same can be said for Annie, whose personality seems subsumed by technology and the demands of the job. In contrast Mae’s parents are the novel’s most grounded characters, trying to cope with illness, unfair health insurance and then finally their daughter’s skewed perception. Such a contrast is no doubt a deliberate device used to highlight The Circle’s dehumanizing technology and its effect on younger generations. Mae’s ex-boyfriend, the artistic Mercer, is an obvious personification of those who inherently distrust the internet and big data. Eggers gives Mercer some hipster credibility, but ultimately he just comes across as a hollow mouthpiece for all that’s believed to be wrong about big data. If his character had been given a more rounded presence, then his endgame in the novel would have packed a bigger punch. Even so Eggers does manage to create some nervy chills from Mercer’s fate, but it is too little too late to improve on the lack of narrative tension that hampers most of the novel.

There is an alternate way to view The Circle; one in which Eggers has deliberately written a novel that appeals to teenagers and twenty somethings. In particular those from that demographic who wouldn’t normally read a novel. Perhaps Eggers has commercially tailored The Circle to reach the widest possible audience because ultimately the themes he explores are real and important. In 1985 George Orwell’s 1984 was part of my year eleven curriculum and it impacted on me greatly. Less than three years later I walked through the city centre of Perth and saw the first CCTV cameras that were supposedly installed for the sake of public safety, and I couldn’t understand why people were not outraged by their presence. So perhaps The Circle is destined for better things? In the future it may be regarded as a key text and its flaws will be overlooked because the themes are so important. Perhaps now or in the future people will be inspired enough by The Circle’s dystopian themes to make a stand against big data’s erosion of privacy.

Note: The Circle gets an admirable rating, although it's not quite there, but nor is it mediocre - it's somewhere in-between, in my opinion anyway.