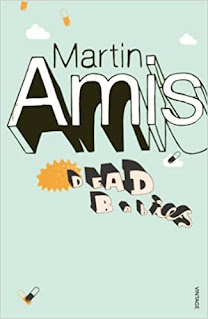 Rating: Admirable
Way back in 2014 I decided to read all of the Martin Amis novels in sequence, having just read his first novel, The Rachel Papers (1973). Now finally, six years later, I've read another! Dead Babies is, firstly, not quite as good as The Rachel Papers, although Amis's prose style is consistently excellent, the themes and subject matter are more dated in comparison. It comes across as a primary influence on the English TV show The Young Ones (circa 1980s). The novel is a satirical skewering of empty hedonism, class snobbery, the faded hippy dream and pretty much everything else that was happening in culture at the time. It's also full of nasty solipsistic characters whose decadence and desperation knows no bounds. The narrative takes place over one weekend in a manor owned by the extremely rich neurotic Giles Coldtstream, called Appleseed Rectory, where the residents are joined by three Americans and a"golden hearted whore" called Lucy Littlejohn and also a "practical joker" called Johnny. The characters are too numerous to comment on with any depth, but Keith Whitehead warrants a particular mention due to his sympathetic status as a fat, short, disgusting "court dwarf", who bears the brunt of the others questionable behaviour, particularly from the Americans toward the end.
There's some humour in the novel, but mostly it's extremely dark, particularly once the Americans arrive and start doling out weird drugs that are meant to make the recipients experience whatever state of mind they desire. It sounds like fun, but it isn't, not for the characters and not for the reader; personally I don't mind these sorts of narratives, but Dead Babies made me react at times as if I could catch the scent of day-old vomit. There is a narrative thrust in the form of a plot based around the mystery of just who Johnny is and why he is, for example, leaving Diana nasty letters and tearing up treasured porn magazines (Keith's). Apparently the novel is a parody of the very English county house murder mystery narrative of the type popularised by Agatha Christie, but they were never as gruesomely perverse as this. The ending is entertaining enough, but I didn't really care what happened to the characters, which I suspect was Amis's aim all along.
Posted by Jeremy at 06:21