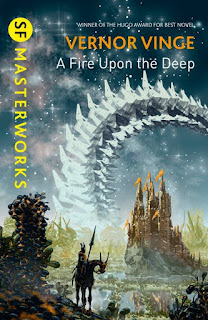 Vernor Vinge is a very interesting character, he's a retired mathematics and computer science professor, but is perhaps more significantly known as an early adherent of the concept of the technological singularity. Vinge also wrote one of the first science fiction stories about cyberspace, with his novella True Names (1981). I picked up A Fire Upon the Deep pre pandemic in Melbourne from the superb Readings store in Carlton and I'm so glad that I did because it is one of the best science fiction novels I have ever read. Like the novels of Iain M. Banks, A Fire Upon the Deep is packed full of highly imaginative ideas. The novel is conceptually brilliant, with a fully realised galactic wide ecosystem dived up into 'zones of thought', that uses an internet-like 'use-net' system of communicating. The novel has everything - a multitude of weird aliens, space battles, transcendent alien intelligences, cool space-ships, duplicity and even something called 'god-shatter' (no, I'm not explaining it).

Vernor Vinge has one of those writing styles that is both easy to digest and yet conveys enough complexity to keep you fully engaged. Vinge also shines at characterisation, although he is better with the alien characters than with the human ones, such as the Nyjoran, Ravna Bergsndot, who is an intrepid librarian stuck in an awkward galaxy wide AI blight type of situation (yes, that's right, a librarian). Aliens such as the smallish tree-like Skroderiders, who scoot about in technologically advanced carts, somehow seem much more developed in character, but this is a minor criticism, as is the slight dip in pace around the middle of this long novel. Perhaps Vinge's greatest creation however, are the Tines, who are highly complex and enduring alien characters that I will not reveal anything about so that you too can have the pleasure of discovering how they tick. It is the Tines that I'll miss the most and I consider them to be one of the most fully realised alien races in science fiction. I'm not surprised that Vinge won the Hugo Award for A Fire Upon the Deep, as its combination of an engaging plot, fascinating characters and its refreshing take on many space-opera tropes makes for compelling reading. I knew that I was reading quality work when I came to a point in the narrative in which I could barely stand what might happen to the characters, so I had to jump ahead to make sure that they would be all right before I commenced reading again, which is something that very rarely happens to me. Vinge wrote a prequel called A Deepness in the Sky (1999), which is now on my ever lengthening to read list.