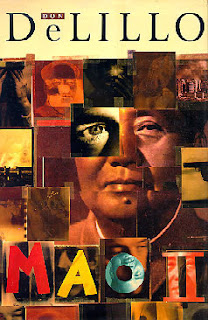 Don DeLillo is my favourite literary fiction author and has been ever since I bought a copy of The Names (1982) from a Perth airport book store in 1989 before I embarked on a trip to Europe. Mao II, of all his novel's I've read so far, is certainly his most literary. The novel features no discernible plot, instead it acts as a focus for various thematic ruminations, such as the cultural agency of terrorists, the declining cultural agency of authors and the individual versus the crowd. The novel features an aging renowned author, Bill Gray, who lives in hiding whilst struggling with writers block, or at least a severe decline in inspiration. Gray hides away from the attention he received due to the perceieved profundity of his work; however an idealistic fan (Scott) tracked him down, ending up working for him obsessively, along with a stray young woman (Karen) rescued from the streets who was one of the hundreds of brides married off to a Korean in a Moony ceremony in the opening scenes of the novel. Meanwhile a photographer, Brita, who only takes photos of authors, has been invited to take photos of Bill Gray, the first in a very long time. The novel ends up taking us, and Bill, to the Middle East, where a young poet is held hostage by a terrorist organisation. All of this is typical DeLillo fodder and you can't help but read the novel carefully, trying to tease apart all the implied meanings and subtexts, which is great fun really, well, for me it is anyway.

As usual DeLillo's prose is spare, delivered with a gravitas that flirts with pretension, yet never succumbs (well, to me at least...). There's something about the way DeLillo writes, whenever I read one of his novel's I realise that during that time I look at the world differently; everything appears to contain hidden layers that are revealing themselves to me. Despite the lack of plot to drive the novel forward, Mao II engages both the heart and mind. There's something about an author of DeLillo's stature writing about writing, creating a fictitious author to convey something about what it is to be confronted by the blank page, to do it every day to hopefully create something worthwhile. Just how worthwhile is one of the most interesting themes in Mao II. An author, like a cult leader, holds multitudes in his/her sway, yet there is virtually no contact made, unlike the cult leader who has regular corporeal contact with other humans. Both, however, are superseded by the terrorist, who both attracts followers and strikes fear into the hearts of whole nations, as opposed to the author and cult leader, both of whom could easily be ignored by the majority. There appears to be a perception among critics that in light of the events of September 11, only ten years later, DeLillo was prescient regarding the impact of terrorism on Western culture, and perhaps rightly so. Meanwhile for anyone wanting to explore DeLillo's work, I wouldn't start with Mao II, despite its layered depths, instead I'd go with The Names (1982) or his post-modern masterpiece White Noise (1985), either way, DeLillo is well worth reading for anyone interested in modern literary fiction.