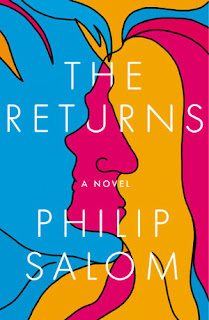 The Returns is one of those books that is about everything, and yet nothing (yes, like Seinfeld), and so therefore is a true piece of literary fiction. There's a slight plot, about two middle aged people finding each other, but mostly the novel is heavily thematic. Salom covers a lot of bases, such as art and its inherent value as therapy through creativity for the artist and a provider of that spark of existential recognition for the consumer of that art. There's childhood trauma, and how readily it shapes the life of the adult. Elizabeth, a waif-like neurotic (although in a charming way), who is a work from home editor of novels (of course), has an aged former Rajneeshee mother to deal with, whilst Trevor, an overweight book-shop owning divorcee who is struggling to rediscover his artistic spark has to deal with his narcissistic Polish father returning from being declared dead. At the heart of the novel is the value of friendship and the importance of new beginnings, two things that most middle-agers (not new-agers) would recognise as being vitally important ingredients in finding some meaning in life just when you need it.

The Returns is also the kind of book in which you suddenly realise that the author is channelling his thoughts about art through the dialogue and inner thoughts of the characters, which is mostly okay, until it becomes very obvious. This occurs when Trevor attends his ex partner's birthday party held in his former home and crashes in on a millennial conversation about poetry (Salom himself is actually predominately a poet) and proceeds the wax lyrical about poetry and novels being hallucinatory, that narratives are drugs that work for some people and not for others, which coincidently is an apt description of my bookclubs' reaction to this novel. I will not hold it against Salom, as it is exactly the kind of thing I'd do if I could actually write a decent novel, which is what The Returns is actually. By the time you get to the end you've really got to know Elizabeth and Trevor and also the host of quite well rounded minor characters. The ending also contains a really tasteful rendering of a relationship changing gear, without any of the cliches and heavy-handedness you may find elsewhere. So, if you like literary fiction in which the kind of 'shit happens' that is typical for middle-aged protagonists to endure, combined with some meaty themes, then this novel is for you. If not then look elsewhere, perhaps in the very shop that Trevor owns, where he will ponder his interaction with you and relate it to either his own life or broader and more nebulous philosophical considerations.