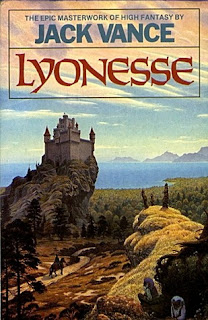 I could count on one hand the amount of fantasy novel's I have read in my life so far, so taking a punt on Lyonesse, which I found at a great op-shop just down the road from the library, was a necessary step out of my comfort zone. Growing up I tried to read fantasy, but soon found that I much preferred science fiction. Fortunately Lyonesse is just fantastic, a well written and thoroughly enjoyable fantasy epic that is merely the first part of a trilogy. I found all three at the op-shop, so I will be reading those in the near future. Meanwhile, just why is the novel so good? Firstly Vance is a classy writer, his prose is efficient, nuanced and sophisticated. Often I would re-read passages simply because they were both beautiful and eventful. Vance displays a great ability to propel the story forward, even when characters were stuck in an impasse or during a bridging section of the narrative. Often the novel focusses on one character, like the princess Suldrun, for long periods, however this is absorbing rather than limiting and the overall effect is deeper immersion into Vance's world building, which is one of the reasons why this novel is so satisfying.

The place known as Lyonesse is itself part of a group of islands off the southern tip of England called the Elder Isles, islands that are actually part of English mythology and where King Arthur was supposedly taken (to Avallon) before, at some point, the entire group of islands were engulfed by the ocean. Vance populates the islands with various kingdoms where humans indulge in deeds of both good and evil. Among the humans are also a multitude of magical creatures, from faeries, trolls, ogres, mermaids, imps, to witches and warlocks. Vance cleverly gives the reader a tour of the Elder Isles via the journeys and adventures of Aillas, heir to the throne on the southern island of Troicinet. Allias firstly circumnavigates the islands by sail-boat and then, due to treachery, is thrown overboard, only to wash up on the shore of Suldrun's garden, where she has been banished by her father, King Casmer, for not marrying the rather ornately named Faude Carfilhiot. Allias' involvement with Suldrun and his flight from Lyonnese to travel through the lands of the Elder Isles propels the narrative forward in adventurous and dramatic ways. Allias' travels through Tantrevalles forest are particularly satisfying, where he encounters all manner of magical creatures and suffers both tribulation and success. I came to suspect that Vance is highly regarded by fantasy fans, something that was confirmed when I mentioned him to my partner's brother, who is a Dungeons and Dragons aficionado (in fact I played my first ever game recently), and he indicated that in his opinion Vance was one of the best. Vance also wrote science fiction, so I'll be checking some of those novels out as well, as fortunately there were quite a few at the above mentioned op-shop, someone's collection no doubt, and now part of mine! Now that's what I call a happy ending.