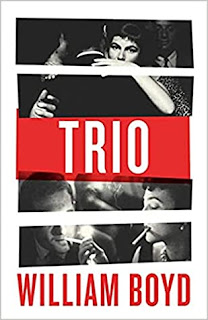 I do believe that William Boyd has written Trio as an antidote to our pandemic blighted times, after all, who needs more darkness and intensity from their literature when it's already happening in society. Trio is a perfect 'light read', with some potentially heavy themes rendered with a, shall we say, light touch. The novel, set in 1968, involves three characters who are all involved with the making of a film set in Brighton - Elfrida Wing, Talbot Kidd and Anna Viklund. Anna is acting in the film that Talbot is producing and Elfrida is a lapsed novelist married to the director, a man called Reggie who, comically, insists on being called Rodrigo. Although the main three protagonists are given quite a bit of page time it is Talbot who tends to dominate; an old school closet case who fought in WWII and stands as a man out of time, surrounded by bright new things such as the gorgeous Anna and her young co-star Troy Blaze. Talbot juggles a multitude of problems that keep getting worse, whilst Anna finds that her extremely dodgy terrorist ex-husband keeps turning up and the police are involved. Elfrida is perhaps the least sympathetic, to me at least, as she irritated me somewhat, with her alcoholism and attempts at writing a novel about the last day of Virgina Wolf, although this actually led to some quite funny moments as she keeps trying to rewrite the opening paragraph (finally resorting to imagining Wolf farting as she wakes up).

Boyd juggles the three characters well and the minor characters are all quite well rendered. The dominant theme is that of identity - the dichotomy between one's inner world and the self that fronts the world at large. The darker themes, such as alcoholism, prescription drug abuse, the danger of being an outed gay man (even after the laws against it had changed) and organised crime do not overly dominate the novel. Often when it looks like one of these themes will lead a character into darker territory Boyd shows restraint and the novel goes back to being an interesting and entertaining narrative about the complexities of making a film. Only Anna slips into the darkness, but even that is handled in a manner in which the reader is shielded from the worst. Trio comes across as literary fiction having a holiday (in Brighton?) by masquerading as popular fiction, which ultimately is absolutely fine. Boyd also chooses not to involve the novel too much in the tumultuous world events of the times, like the Vietnam war, the assassination of Martin Luther King and another Kennedy assassination (Robert). The Paris riots and revolutionary fervour features indirectly as a means for Talbot to begin a running joke that he had been punched in the face by a French philosopher, you'll understand if you read the novel. You could do much worse than Trio, which would be a fine summer read or a good book club read - my book clubs mostly enjoyed it and the discussions were entertaining enough, and sometimes that's enough.