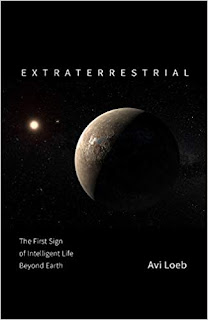 Being interesting in all things astronomical, I distinctly remember in 2017 the reports of a strange object, eventually dubbed Oumuamua (Hawaiian for 'scout'), visiting our inner solar system at a trajectory that could only mean that it came from deep space. Although no direct images were taken of the object it was observed as closely as we could at short notice and astronomers ascertained that it was a cigar-shaped object, possibly an asteroid or a comet. I also remember later reports of a scientist (which turned out to be Loeb) who proclaimed that Oumuamua was in fact a piece of alien technology, possibly a 'star-sail'. I remember scoffing at the idea and thinking that the astronomer had been reading too much science fiction. Now comes Avi Loeb's book and I have to say that he presents a convincing case, outlining logical arguments that both counter the idea that Oumuamua is a natural phenomenon and supporting his theory that it is in fact alien technology.

I will not go into great details about Loeb's theories (read the book), but one of the two observations that won me over is that Oumuamua "...deviated from an orbit shaped by the sun's gravity without showing any discernible cometary tail..." For those that don't know, when these kinds of objects near the sun they outgas vapours which then usually alter their speed and/or trajectory - there was no evidence of outgassing, despite our best observations, and yet, to paraphrase Loeb paraphrasing Galileo, it moved. The other observation is that Oumuamua was travelling at a speed that placed it 'at rest' relative to the speeds of the stars in our neighbourhood (known is the Local Standard of Rest - LSR), meaning that relative to our solar-system it was pretty much standing still and we ran into it. Loeb likens Oumuamua to a buoy, perhaps placed in that position for a particular purpose, which really gets the imagination going.

Getting the imagination going is certainly one of the results of reading Extraterrestrial, however the more I read Loeb's book the more I got the impression that he was holding back from extrapolating too much about the startling implications of alien technology visiting our solar-system (lest his arguments be weakened and left open to attack?). Loeb takes a great deal of care to explain just how statistically improbable it would be that such a weird object, if natural, would be observed entering our solar-system by us within the very short time we have had those kinds of capabilities (< than a century) - such an object would have to be leaving other solar systems at a continual and prodigious rate, such is the vastness of our cosmos; but he doesn't then state that this notion means that it is definitely a piece of alien technology, rather it is another piece of supporting evidence. Loeb does, however, spend a great deal of the book lamenting the conservative state of scientific academia and the fact that well established theoretical paradigms such as string theory and supersymmetry, which have no supporting evidence, are routinely explored and yet the notion of extraterrestrial life gets short shrift by many scientists. Loeb evokes the example of Gallilao's discoveries being silenced by the Catholic Church in his arguments, which would no doubt piss off many up-tight scientists working in Loeb's field (that's another thing, Loeb isn't a fringe scientist, he's based at Harvard and has a multitude of important papers on subjects such as black holes behind him, he's very credible). Not coincidently other scientists have just put forward an updated version of what they think Oumuamua might be, perhaps as a refutation of Loeb's successful book. Having read it I'm still more convinced by Loeb's arguments.

Those (few) who read this blog regularly may recall that recently I reviewed Whitley Strieber's book, Communion (1987), and being dubious about Strieber's supposed 'encounters' with aliens here on Earth. Arthur C. Clarke once suggested that if aliens turned up their technology would be so advanced it would seem like magic to us. Perhaps this would be the case, certainly in some regards, however there's pretty hard evidence that to travel great distances quickly through space in a safe way is an extremely difficult thing to do, therefore aliens such as those in Communion would be unlikely (unless they arrived via generation ships - see below...). The best way around it is not to try and send out flesh and blood into the cosmos, but rather machines. Oumuamua could be one such machine, and why not?, humanity is doing such things right now. I've always thought, and in this book Loeb also talks along the same lines, that if you think about what humanity is capable of right now, or is theoretically capable of if time and money were not issues, it would be reasonable to assume that any intelligent aliens would also be capable of similar, and as Clarke noted, quite possibly a whole lot more. What if alien cultures were out there in near-by star systems and they sent out probes to examine local star systems looking for interesting planetary systems to contact or perhaps to visit (via extremely slow generation ships that travel for millennia - the only way to do it safely really). If so, maybe Oumuamua is reporting back and one day our solar-system will be visited. What would they find? Unfortunately, the way humanity is going, only remnants of a species with great potential that couldn't get through the 'Great Filter' of technology that both provides great promise and at the same time the very means of our destruction.