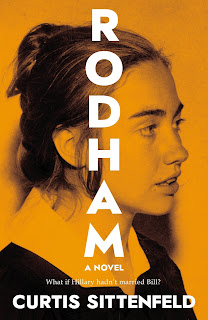 First of all, Rodham is a very clever novel. Ostensibly it is an alternate history of Hillary Rodham and Bill Clinton's lives and relationship, but thematically its main thrust is the patriarchal nature of American society and how it leans towards rewarding men, whilst keeping women in check. Rodham is an enthralling read, although many will be put off by its detailed descriptions of politicking related via the first person voice of Hillary. Sittenfeld totally nails how you'd imagine Hillary to think, conveying a tone that is both intellectual and charmingly vulnerable at the same time, an approach that works to humanise one of the most vilified and misunderstood women in American public life. So, what would have happened to Hillary Rodham if she had not married Bill Clinton? Anything is perhaps possible, but Sittenfeld weaves a very credible alternative history of Hillary's life and times living in one of the most contradictory and complex societies on earth. Sittenfeld astutely casts Bill Clinton as a fatally flawed man, who is somehow both reprehensible and sympathetic at the same time, creating a credible (although still fictional in this context) impression that Hillary really did have a tough choice to make way back in the early 70s. Ultimately, however, the novel does the real Bill Clinton no favours; I wonder what the real Bill Clinton thinks about this novel, and Hillary for that matter? As far as I know neither have commented so far.

The novel really comes alive when both Hillary and Bill share the page, particularly in the opening section when they first meet and embark on a passionate relationship, so much that when the narrative fast-forwards to Rodham in middle age, leading her life without Bill, the novel falls a bit flat. What really happens, however, is that the novel becomes a different beast and draws you deep inside Hillary's life and psyche, with all her frustrations and aspirations laid bear. Once she decides to run for the senate the novel becomes a particualry absorbing read and twists the alternate timeline in fascinating and credible ways. The way Sittenfeld positions Bill Clinton and Donald Trump as different sides of the same coin is a canny move, helped with a serving of irony in relation to Trump and Rodham's interactions. Sittenfeld totally nails Trump's character as well. Not everyone will love this novel, but I certainly did. Sittenfeld is a classy writer with great control over both style and narrative form. Rodham also has a satisfying denouement, one in which Hillary finally reaches fulfilment, yet with enough depth to withstand criticisms of being unrealistic or merely a fantasy wish-fulfilment for the millions of American women who support the real Hillary Clinton.