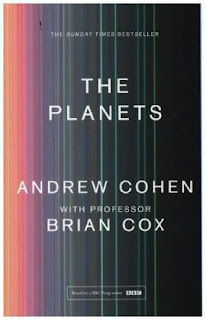 I bought this book thinking that it would give me a quick update on everything that has been discovered about the solar system in recent times. It turns out that I've actually been keeping up with most recent discoveries, however for those that haven't been keeping up, or know very little about our family of planets trapped in the gravity-well of old Sol, then this book would a good place to start. The Planets gives a fairly straight forward summation about each planet by, in most cases, grouping them together and discussing them related to each other, the exceptions being Jupiter and Saturn. Most of the various significant moons and the astroid belt get a look in as well. The basic facts and the more astounding aspects of each planet are presented in easily digestible chapters. Also featured are informative tables and quotes from scientists meant to either underline the main points or to engender a feeling of profundity, although this didn't always work for me, but perhaps I'm a bit jaded in this regard, or perhaps the font was just too small for my middle-aged eyes.

One of the best features of The Planets is the focus on the the history of planetary exploration via highlighting the incredible stories of the probes humanity has sent out into the solar system, such as Pioneer 10, Mariner 4 and the two Voyagers. Such achievements are truly significant and without these probes our knowledge of the planets would be quite paltry. Of particular interest is the story of the Messenger probe, which undertook a remarkable journey to investigate the planet Mercury, which is a much more fascinating planet than most people would expect. There's also the Cassini probe, which explored Saturn, at the same time launching the much smaller Huygens probe onto the surface of my favourite moon - Titan. I remember that era of exploration clearly and it was great to read a fairly detailed account of their discoveries. However, detail, or lack of it in some cases, is also a flaw of the book. Obviously The Planets is a fairly generalised account of our solar system, but considering just how little was known about Pluto before the arrival of the New Horizons probe in 2015 there is scant detail about this amazing 'dwarf planet'. There was also little information about the trans Plutonian objects, such as Eris and Makemake. Although this is more understandable considering we have not visited them, some extrapolation would have added something extra to what was a rather truncated end to an otherwise useful and at times inspiring account of what is essentially our home turf in this galaxy of ours.