Tiger Tiger (AKA The Stars My Destination) - Alfred Bester (1956) 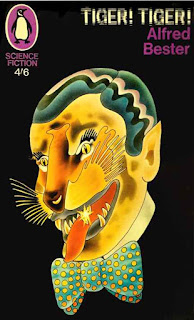 I picked up a copy of this novel, a 1967 edition, from a second hand bookstore in an old house situated on the main drag of a small country town in Tasmania a few years ago. Then a while later I coincidently read online that it contained one of the best 'escape from an impossible situation' scenes in literature. Now that I've read Tiger Tiger I have to say that I don't necessarily agree, it wasn't that spectacular. I chose the novel as a potentially great holiday read, and at first it lived up to that need. Tiger Tiger is certainly a rollicking read, with some impressive pacing and the main protagonist, Gully Foyle, is a wild character bent on revenge. The novel is set in the twenty fourth century, a time when, inexplicably, the ability to teleport (they call it jaunting), has transformed human society. Basically humans can travel by thought (an influence on The Church song of the same name?), which certainly opens up some fascinating narrative possibilities.

What ultimately let's Tiger Tiger down is that the novel's over the top nature becomes wearying around two thirds of the way through. It's like listening to two Queen albums at once. The prose is too florid, the twists and turns too frequent and the whole idea of humans being able to teleport by the power of thought alone becomes increasingly ridiculous. I don't necessarily need literary fiction to be particularly realistic, let alone science fiction, but it really started to grate after a while. Tiger Tiger does have quite a spectacular ending, which really sticks it to 'the man', but by that stage I think I had eye strain from rolling my eyes too much. Ultimately Tiger Tiger doesn't come across as a parody of the 1920s - 1940s era of pulp science fiction, or even as a homage, but as an attempt to emulate its style, perhaps in order to appeal to the teenagers of the 1950's, who after all would have still been science fiction's main market. The sometimes unfortunate depictions of female characters bear this out. I'll mark this one down as an entertaining enough holiday read that stands as a period piece for the curious.