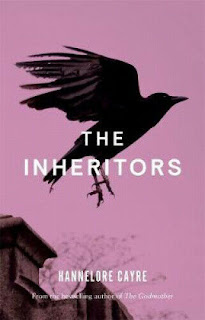 The Inheritors is a curious novel by a French author who made waves with The Godmother, a crime novel published in 2019. The Inheritors is a kind of crime novel, with most of a family being knocked off by the main protagonist, Blanche de Rigny, but these murders are more like blows against capitalism, avarice and generational wealth. The novel features two timelines, one set in 1870, featuring Auguste de Rigny, a foppish member of a filthy rich family who rails against inequality, yet can't completely let go of the benefits that wealth brings; one benefit being able to buy a man to fill his place in the army at the onset of the Franco-Prussian war. The other timeline, featuring Blanche, is set in contemporary times in Paris, and Blanch, being disabled and disaffected, also rails against inequality. When Blanche discovers her familial connections with the still very wealthy de Rigny family the plotting begins.

The Inheritors is a short, reasonably well written novel, however is doesn't quite catch fire. For a short novel it quite often gets bogged down in detail, like Blanche's detailed explanations of her family and the 'mission' she undertakes (to strike at the heart of greed and do something useful and moral with all that money). The above detail about the novel does not count as a spoiler, due to the fact that it is all spelt out on the back-cover burb. That's part of the problem, you know what's going to happen, the interest lies in how it happens, but unfortunately I was quite often bored and the main thrust of the narrative didn't get going until about half way through. More engaging were the nineteenth century chapters, with fine depictions of life in Paris at that time and the entertainment of Auguste's rather pathetic life. Even so, neither Auguste or Blanche, or any of the minor characters for that matter, engage you enough to make you care about their struggles or motivations. Essentially this novel is an economic revenge fantasy, which is interesting when you consider that the French have actually been good at making such a thing a reality over the centuries.