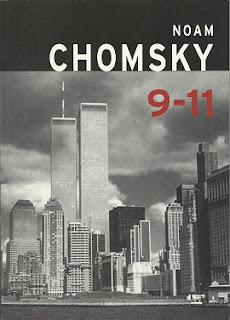 I found this very short, 124 page book in an op-shop I frequent very close to the library earlier in the year and I immediately realised that I had to buy it because this September would be/was the twentieth anniversary of the 9-11 attacks on America. Like many people I watched the first tower on fire on TV and then the second tower be hit by the second plane. It was amazing, visceral history unfolding before our eyes. The aftermath was confusing, intense and scary in terms of just were it all might lead. We know just where now, but when this book was published we only had an inkling. 9-11 is a collection of interviews with Chomsky with journalists from around the planet, conducted mostly via email. As you would imagine Chomsky gives well considered answers and it makes for sobering reading. Most of the questions are geared toward who attacked America and why (at the time bin Laden was only suspected) and then what will happen in the near future because of the attacks. It is not particularly compelling stuff, rather it's more depressing and sobering reading, particularly in light of what went on to happen and the situation we find ourselves in now, where in America the situation has darkened and decayed significantly with Trump's threat to democracy and the potential repercussions of America's withdrawal from Afghanistan.

During many of the questions Chomsky talks about America's poor record around the world, in particular in the Middle East, Afghanistan and Nicaragua. Chomsky refers to America as a 'leading terrorist state', mainly due to their actions in Nicaragua (now decades ago), and when you read what he has to say you have to admit that he has/had a point. There's also a great deal of talk about Osama bin Laden, whether he was responsible and we all know how that panned out. Overall it was fascinating to read responses from an intellectual of Chomsky's renown so soon after the attacks (the book was published in November 2001) and with added historical hindsight. I also watched the documentary 9-11: Inside the President's War Room (2021) on Apple TV, which was just incredible. For all of his flaws President Bush actually comes out of it looking better than he had at the time. 9-11 is obviously still causing repercussions now and this book acts as a primary source when thinking about how we have arrived at this point in history. It was updated in 2011 with the added subtitle: Was There an Alternative?, with an extra essay by Chomsky. Important but depressing reading.