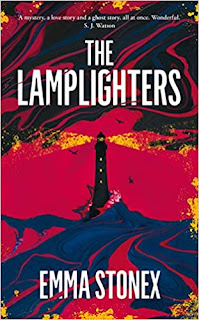 The Lamplighters is exactly what I'm beginning to think is typical fare for a book club read, a so-so novel that is basically popular fiction with some pretence or ambition to be literary fiction. The Lamplighters has some of the typical tropes of modern literary fiction, fragmented both through time, jumping back and forth between 1972 and 1992 and into sections dedicated to three different women, who were all in relationships with the three lighthouse keepers who mysteriously go missing in 1972, never to be solved (well, until you read the ending that is...). The central mystery of exactly what happened to the men tugs you along through the novel, however there are some slow points, in particular some of the sections in which the women are interviewed by a writer doing research for a book about the disappearances. The women are naturally evasive, all having something to hide, but in a way that means they tend to produce a great deal of prattling dialogue. I started to speed-read these sections, which is never a good sign. The novel has a bit of padding and perhaps could have been tightened up a bit, particularly with the revelations coming a bit too late to feel like you are being rewarded for your perseverance.

There are things to admire about the novel, such as Stonex's fine eye for detail and fairly impressive descriptive powers. Stonex powerfully evokes the men's lives within the lighthouse and the sea with all of its beauty and menace. Stonex also has created a fine array of characters, all of whom are well rounded and believable, in particular Arthur, the Principle Keeper (PK), who is hardened by all his years on the lighthouse. Unfortunately Stonex brings into the mix some supernatural elements, which, in the end, undermine the psychological depictions of the characters, which is a strength of the novel. This spoilt the ending for me, souring the pleasure of finally finding out exactly what happened. This left me with a dissatisfied feeling and the notion that the novel was trying to be too many things at once and would have worked better if it was more focussed, playing to its strengths of setting and psychology. Still, anyone who enjoys a good lighthouse mystery tale and feels like a light holiday read should garner enough enjoyment.