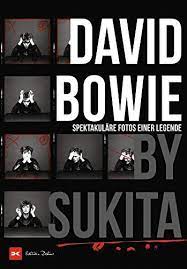 This superb book was bought for me by my fiancé for my birthday earlier in the month. Having been a massive Bowie fan since my teens it was an obvious choice. Sukita, from the early nineteen-seventies, took some of the most significant and famous photographs of Bowie. This book contains many photographs that I'd seen in the past, but that I was not aware Sukita had been involved with, so as I went through this beautiful book I was taken by surprise numerous times, which added to the pleasure. There's also some rare photographs included that I'd never seen before. The most famous photograph Sukita took was the one that ended up being used for the 'Heroes' (1977) album, however I had always loved the other photos from this session - in black and white, with Bowie in a leather jacket looking angsty and intense, revelling in his mid 1970's pomp. Fortunately many of the photographs from this session, which actually took place in Japan, despite the album being so associated with Berlin, are included here.

I could write a significant amount of words regarding this book, however, in the end, I'd be merely gushing. One definite thing I will say is that all Bowie fans should have this book in their collection. The photographic reproductions are of a high quality. Sukita provides the text, which is obviously translated and displays a certain charming sensibility of a non-English speaker, who is also very respectful of both Bowie and the work they did together. This becomes very poignant toward the end of the book when, in 2009, Sukita took his last shots of Bowie when he was visiting New York, only one of which is reproduced here. Perhaps this is the only criticism of this book, that it could have been much bigger, with many more photographs, particularly as Sukita worked with Bowie at many different points during his career. However, like Bowie himself, Sukita comes across as someone concerned with quality control, which is totally fair enough. Reading this coffee-table, hard-back book has inspired me to look much more closely at many of these types of publications I have in my collection. In the past I've merely leafed through them, but now I'm going to read them from front to back, so expect more to appear on this blog in the future, including some more about Bowie and other of my musical obsessions.