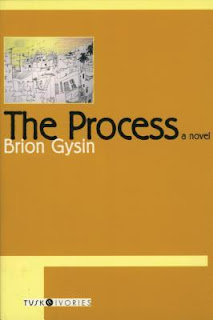 The Process is the first book in about fifteen years that I've abandoned. I have a fairly formal arrangement with my reading self to not abandon books I'm not enjoying, which in part probably stems from the discipline of reading for a book club, particularly as I facilitate the sessions. I lasted one hundred pages before I couldn't stand it any more. The problem? Mostly because I've read too many novels like this one, with narratives that are plotless, predominately picaresque in nature and full of flaneur type characters. I love the Beat writers, in particular the great Jack Kerouac, but Gysin, here at least, does not match Kerouac's flair, technical prowess and wide-eyed wonder at the world. Instead, the main protagonist, Ulys O. Hanson, sets out from Morocco to travel across the Sahara Desert, with no luggage save for a hefty bag of 'Keff' that he smokes continually in a pipe. Apparently Hanson meets with the famous Master Musicians of Jajouka and L. Ron Hubbard along the way, but I didn't get that far, worn down by Hanson's stoned wanderings and descriptions of the desert people, the landscape and the mystical trances those he allows to puff on his pipe go through. It's mildly engaging, but I couldn't get rid of an impatient itch inside me that grew until I couldn't stand it any more. I used the excuse of having to begin the next book club novel to bail.

Brion Gysin (1916 - 1986) himself was quite an interesting character however, a friend of William S. Burroughs and inventor of the 'cut-up technique' of constructing narrative, of which Burroughs embraced wholeheartedly for a series of startling novels from the 1950's until his death in 1997. Gysin was predominately an artist, poet and performance artist and also inventor of the Dreamachine, a stroboscopic device that induced patterns of colour when viewed with eyes closed. Far out man. The Process is Gysin's main novel, with other publications mostly featuring poetry and short fiction, including The Third Mind (1978), co-authored with William Burroughs. Alas, such a pedigree of creative spirit and connections was not enough to propel me forward through to the end of The Process, so in fairness I'm not going to rate this book, only the second in the ten year history of this blog not to be rated.