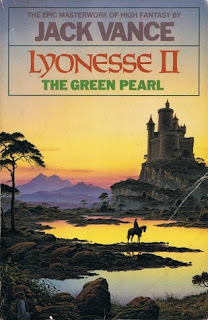 Jack Vance was such a superb writer, his prose is just so vivid and classy that even though The Green Pearl is not quite up to the quality of the first book in the Lyonesse trilogy, Suldrun's Garden (1983), it is still an immensely satisfying read. The Green Pearl follows the adventures of many of the characters from the first book, particularly Aillas, who is now the king of the southern island of the Elder Isles, Troicinet. Although the novel begins with the sinister movements of the evil green pearl, which appeared at the end of the first novel, a great deal of the narrative follows Aillas' political and military adventures. Whilst the magical forest of Tantrevalles featured strongly as a setting in the first book, here it is the barren and mountainous region of Ulfland that dominates. Aillas battles the Viking-like Ska, who have declared themselves at war with the rest of the world and occupy much of Ulfland. Aillas' wizard ally, Shimrod, appears again and gets caught up in attempting to satisfy his carnal desires with the mysterious Melancthe, who comes across, somewhat humorously, as a parody of a goth (as in goths from the late 70's music scene...).This is just some of the colourful adventure and political intrigue featured as the novel steadily builds its narrative arc.

Once again Vance sends his protagonists on long adventures during which they face dangers both of the practical and the magical kind. It's entertaining stuff and I would imagine that this narrative form was aimed at players of Dungeons and Dragons, who would have been strongly drawn to many of the tropes featured  throughout the novel. My favourite part of The Green Pearl comes towards the end, when the beautiful princess, Glyneth, is kidnapped by the obnoxious Visbhume, a somewhat mediocre wizard, and is taken to the parallel world of Tanjecterly, where humans can live, but are threatened by all kinds of monstrous creatures. This section is wildly imaginative and exciting, with Glyneth going against type as a helpless princess, taking things into her own hands. The Green Pearl has much to recommend, including characters with depth and dialogue that sparkles with verve and complexity. The world-building is sophisticated and features an array of characters with brilliant names and unusual characteristics. As far as trilogies go, The Green Pearl is typical in that although it features a multitude of narrative pleasures, it does come across as a bridging novel, and therefore suffers slightly as a consequence. However, from what I've heard from those in the know the third novel, Madouc (1989), is a fine end to the trilogy, so I'm looking forward to reading that in the near future.