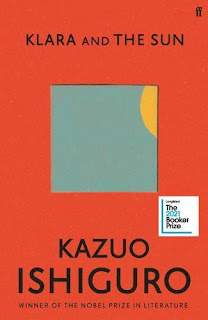 I'm in two minds about Klara and the Sun. Ishiguro has produced a fine novel, his first since winning the Nobel Prize for Literature in 2017, and the breadth of his ambition is to be admired, with some intriguing themes dealt with in a subtle and intelligent manner, however I did not actually enjoy the novel particularly. Klara and the Sun is another stab at 'literary science fiction', in a similar vein to Never Let Me Go (2005), as has been noted by some critics, which is a reasonable summation, although to be fair to Ishiguro there are some fairly significant differences. The eponymous protagonist is an AF (artificial friend), an AI humanoid android, who is purchased by the mother of fourteen year old Josie to keep her from being lonely while she spends her days isolated, learning online and being afflicted by a mysterious illness. The illness, once you come to understand its nature, is not so mysterious and is one of the more morally ambiguous themes explored in the novel. Klara is a very capable AF, both intelligent and benign, but also surprisingly naive. Although as the novel progresses you learn just how society has been negatively transformed by humanoid AI androids, Klara herself is shown to be nothing but kind to those around her, in fact she is much more caring than the stressed out and fickle humans. The human characters are mostly average people living in what appears to be a radically altered culture, although the reader is never privy to the mechanisms behind these changes, they are only hinted at. The majority of the human characters are merely the end users of these radical technologies, trying to cope with the moral and practical challenges they present.

Although Klara is a fascinating protagonist, the fact that the story is related from her point of view means that the novel has an almost flat one dimensional tone that does not easily allow narrative tension to build. Klara's narrative voice is predominately observational in nature, so that often the novel is weighed down by excessive descriptions of what the characters are doing, how they are relating to each other and why they are doing the things they are doing. A trip in the car becomes a tedious affair due to the fact that Klara relates every single thing about it. I often found myself speed reading or skipping ahead to more significant portions of the narrative, which is always an unfortunate outcome for the reader. The novel is also imbued with a melancholic tone and a feeling of quiet desperation on the part of the human characters. Sometimes there is an ominous, bordering on disturbing aspect to some of the more curious parts of the novel, however it occurred to me that Klara and the Sun is like a 'light' version of a J G Ballard novel, relatively unsettling, but ultimately not unsettling enough, which is a shame really, as there are important themes at play that could have made a greater impact if the narrative had been more dynamic.

As a postscript yesterday I facilitated the last of three library book club session to discuss this novel and the groups were roughly split into thirds, with one third loving the novel, another third opining that it is a failure and the final third being somewhere in-between, which is where I stood. It's certainly a divisive novel, which, as is often the case, led to in depth discussions and quite a few people coming away with a greater appreciation of the novel's finer points. I came away from these discussions thinking that, despite its flaws, Klara and the Sun is a subtle and thematically sophisticated novel. It makes me wonder how the novel will be regarded in, say, ten years time. As an important novel? Or as an underrated cult classic? Given Ishiguro's status it will probably not fade away and perhaps it will glow more brightly in its afterlife. Part of me kind of hopes so...