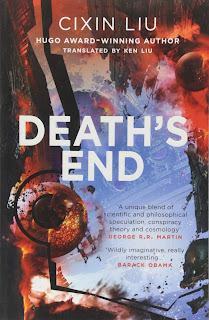 Death's End, the third book of the Remembrance of Earth's Past trilogy, is a remarkable science fiction novel, perhaps the greatest one I've ever read, and certainly the best closing novel of a trilogy I've ever read. I've never encountered a science fiction novel quite like Death's End. The manner in which Liu spins his tale is just beguiling, endlessly fascinating and compelling. The narrative is logical and precise, despite being six hundred pages long. Nothing is wasted, everything is connected and the narrative thrills are astounding. What is truly remarkable is that Liu takes his time, never giving in to any notion of satisfying the reader's narrative greed; back stories are given space to breath and when the narrative is jolted forward by a revelation or plot development it comes across as a totally natural development of what came before, even though you didn't see it coming. Death's End encompasses an enormous time frame, beginning during the twentieth century 'Common Era' of the first novel, The Three Body Problem (2008), and through the 'Crisis and Deterrence Eras' of the second novel, The Dark Forest (2008); and then through the 'Post-Deterrence Era' and five other eras before ending some eighteen billion years later! What occurs in-between is just a stunning and unique exploration of humanity's struggle to survive in a dark universe (and I mean bleakly dark).

One of Cixin Liu's most impressive achievements is the application of the laws of physics and cosmology taken to their most extreme and logical end points. The highlights of this approach are numerous and unfortunately hard to talk about lest I reveal too much. However it's probably safe to mention the sections that involve humans encountering and exploring four dimensional space. The manner in which Liu uses four dimensional space as both a brilliant plot device and as a way to just blow your mind is incredible. This is just one example of the many times I actually exclaimed out loud "Wow!". It does help to know something about physics, such as theoretical eleven dimensional space, quantum mechanics, black holes and relativity, so if you can brush-up before reading it will greatly enhance your enjoyment. To contrast this (although it is connected with physics), Liu also includes three fairy-tales that are brilliant in their own right, in particular in the clever way they are connected with the main narrative. As for the writing, although not exceptional, Liu's style is more than adequate, and compared to the first two books is quite often poetic and beautiful. The characters, which sometimes came across as merely vessels to help tell the story in the first two books, are more well rounded here. Unusually for me I've indulged in some hyperbole in this brief review ( I could easily write an essay), but I have to say there's no other way to get across just how good this novel is. If you are fan of science fiction you have to read it, but you'll have to read the first two books first! Fortunately both are excellent in their own right, but Death's End is the amazing reward that closes out an incredible imaginative exploration of what the universe could well be like (but let's hope not!).