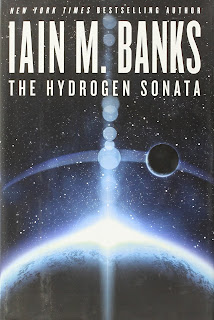 Rating: Excellent
Well, that certainly was fun. I'd read that the last two Culture novels were not as good as the earlier ones, however The Hydrogen Sonata, the last, unfortunately, due to the author's death in 2013, is no slouch when it comes to Culture driven thrills. The novel is flawed, in that, as usual, Banks can really take a long time to get to the point, both when putting a plot together and during certain scenes in which dialogue or extrapolation is lengthy, however to many this is part of the attraction, including myself. Other than Banks' usual stylistic predilections, The Hydrogen Sonata is quality science fiction. The principal theme of the novel is the concept of subliming, when an advanced species has been around long enough and has achieved enough that it can move on to a higher reality. In the novel this is helpfully described as a limitless lucid dream state existence. The humanoid Gzilt, who once could have joined in on setting up the Culture, are set to sublime, however some have their doubts and there is a possibility that their holy book, The Gzilt Book of Truth, which ultimately directed them to this point, is all a pack of lies.
The Culture becomes very interested in whether the Gzilt are about to sublime under false pretences, as are two opposing factions of the Gzilt. Enter Vyr Cossont, an eccentric Gzilt women who sports an extra pair of arms so she can play T. C. Vilabier's 26th String-Specific Sonata For An Instrument Yet To Be Invented - 'The Hydrogen Sonata', on an instrument called an eleven string. Cossont is asked to look for Ngaroe QiRia, an extremely long-lived man who should have memories of when the Book of Truth was introduced to the Gzilt. This is a typical Banks premise, as is the clever humour and the legion of Culture ship Minds who band together to try and solve the mystery. I enjoyed the Minds in this Culture novel much more than in other some of the other books in the series, I'm not sure exactly why, but their personalities and motives seem much more tangible. The novel is ultimately nicely paced, once you get used to Banks' style of course, but where he really excels, as usual, is in the many set pieces that show off what was an exceptionally creative imagination. One of the best being the scenes on a Gzilt party ship, travelling through an immense tunnel within a circular habitat, partying hard for five years until the subliming, most notably when Cossont meets the chief partier, a body artist called Ximenyer, who features forty eight penises all over his body. Enough said, perhaps, except to say that The Hydrogen Sonata did not disappoint and Banks was at the height of his considerable powers nearing his premature death. It's such a pity he is no longer with us, as I'm sure he had many more Culture novels left to write.
Posted by Jeremy at 05:31