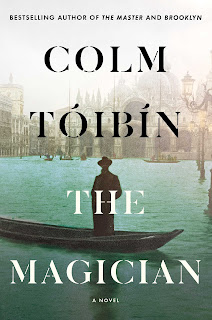 For a multitude of reasons The Magician truly is a sublime novel, however I will qualify that statement by saying that it isn't for everyone, particularly for those that enjoy fast paced novels. The novel unfolds like a long evening in the study of a well-spoken individual who is greatly interested in what lies beneath every-day things, while discussing it over many whiskies and cigars. Essentially The Magician is biographical fiction about the life of the German writer Thomas Mann, who was one of the great modernist authors. This is serious literary fiction about a cautious, yet talented man who was caught up both in the tumult of German history and within the careful repression of his own homosexual desires. I finished the novel feeling like I really got to know Mann, almost like I was his confidant. Within the novel lies profound human psychological depths, not just regarding Mann, but also his wife Katia, their six children and the German nation and its peoples. Toibin really is a remarkable writer, his prose is focussed, poised and capable of providing great insight. There's also some sly wit and at times the novel is filled with humour and warmth, but also it does not shy away from exploring the darkness of living during interesting times.

Toibin explores twentieth century history through the prism of the Mann family. Rather than going over familiar historical ground, the culture, history and society of the times are revealed via the lives of the Mann family, in particular through the eldest children, Erika and Klaus, who in the nineteen thirties live the kind of lives that was unimaginable to Thomas Mann himself; they were free to socialise widely and explore their sexuality openly. It's as much their story as it is Thomas Mann's. The same can be said for Katia, and some of the other children, such as the resolute Golo, who after Thomas Mann's death became a historian. The character studies are superb and we are also treated to many cameos of famous authors and prominent historical figures, such as Einstein and the writers W. H. Auden and Christopher Isherwood, who are both treated to some of Mann's withering German wit. The novel also provides great insight into what it is like to live in exile and to be alienated from your own homeland. The Mann's personal pain regarding what happened in Germany is rendered palpable. Once again, The Magician is not for everyone, but it stands as a brilliant achievement by Toibin that makes you want to explore the writings of Mann, which is actually something I'm yet to do.