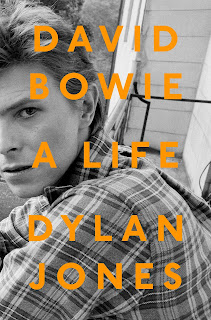 I've read so many biographical Bowie books in the past that I never thought I'd read another one again, however when A Life was published in the year after Bowie's death I kept on reading parts of it each time I went to the book store. I resisted buying it, but then I saw it about six months ago in a second hand book store for only ten dollars, and so here I am. The reason why I bought and read it in the end is because of its unique (among Bowie books) lay-out in which people that knew Bowie in all kinds of capacities talk about him in terms of their personal experiences. What makes this book fascinating is the range of people involved that you don't normally find in Bowie books, there's childhood friends, collaborators, musicians bloggers, journalists, novelists, designers, artists, actors and even a palliative care doctor. This disparate bunch of people give a really interesting perspective into Bowie and his life. Also, refreshingly, A Life does not deal that much with his music, rather the primary focus is on Bowie as a person and on how he went about his business. As a long time Bowie fan who knows a great deal about the man and his music there was a great deal to discover. It was a total pleasure to read. A Life is set out chronologically in time, and is broken up into discreet periods, which worked well. Some may find it a bit repetitive and the other 'flaw' is that there are no photographs, but these are minor matters. If you are a Bowie fan I advise you to read this book.

In keeping with the theme of A Life I thought I'd write about my relationship with Bowie. I was born in 1969 and by 1979 I had become aware of Bowie, but did not become a fan until my sister took me to see him in concert in 1983. I was amazed, enthralled, and started buying his back catalogue. As a typical alienated angsty teenager Bowie was just what I needed. In A Life it is pointed out that Bowie was able to project himself in a way that appeared to be speaking directly to the individual, that you could recognise something about what you were going through in your life and feel that you were understood. In this way he became a kind of friend to me, someone you could turn to when things weren't great. I could put on the Diamond Dogs (1974) album, for example, which was filled with obscure lyrical references and dark themes, and feel like it spoke directly to me. Added to this was his musical brilliance, his predilection for fascinating cultural references and his striking individuality. I was lucky enough to meet Bowie in 1987 at the back of the Sydney Entertainment Centre. I spoke to him briefly and got his autograph. It was a bizarre experience, like I had drunk a few beers on an empty stomach. I'll never forget it. That bonus one on one experience with Bowie was certainly great, but really what I am grateful for is that Bowie gave me a lifetime of both musical and intellectual stimulation and a strong personal connection that ultimately is distinctly humanist. So thank you, Mr David Bowie.