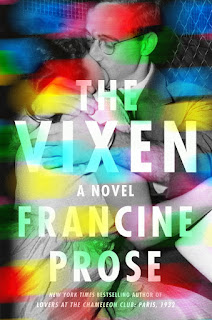 The Vixen begins rather promisingly, with main protagonist Simon Putman witnessing the live to TV reporting of Russian spies, Ethel and Julius Rosenberg, being executed via electrocution in 1953. Simon's mother was an acquaintance of Ethel Rosenberg, and therefore the Putman family is understandibly upset. Simon is a Harvard graduate who ends up getting a junior position at a New York publishing firm. Eventually he's given the job of editing a potboiler novel based on the Rosenbergs, called, wait for it, The Vixen, The Patriot and The Fanatic. The real The Vixen novel is a middling novel at this point, with attempts at humour from Simon's constant insecurities about, well, pretty much everything. It is difficult to write novels that are funny and I've noticed over the years that authors try to generate humour via character's insecurities. However when it is over-done, as it is here, the reader quickly becomes very irritated, as I certainly did. I did marginally enjoy the accounts of Simon's times at Harvard and some of the scenes at the publishing firm, however Simon is a totally unlikeable protagonist; totally insufferable, and although I acknowledge that he's meant to be like that, it just doesn't make for good reading.

The novel picks up when the supposed author of The Vixen, The Patriot and The Fanatic is introduced. Anya Partridge is a wild impetuous young woman who takes Simon on a rollercoaster ride of passion and lusty madness. Anya is a vital spark that improves the novel immensely. Unfortunately she disappears, leaving both Simon and the reader in a forlorn state. Such was my subsequent disinterest in the narrative, I sped-read the last half of the book, which is a rare thing for me to do. There are some revelations in there, but I just didn't care at all. During The Vixen's denouement I just wanted it to end, but it dragged on, and then ended suddenly, with a life-lesson for both Simon and the reader. This was a book club read and I wasn't the only one who didn't enjoy the novel, in fact it is one of the worst rated novels in the book club's fifteen year history, and that's saying something. I'm sorry Francine Prose, but we just didn't like the novel, maybe because we are Australian? Perhaps American readers would warm to the novel more, with its cold-war setting and propaganda and 'fake news' themes.