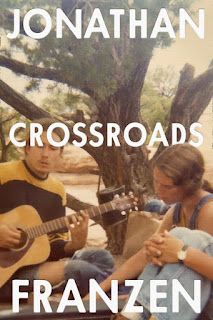 Another family saga by Jonathan Franzen, this time it's the rather dysfunctional Hildebrandt family who live in suburban Chicago circa 1971. I'm one of the few people who haven't read the dysfunctional family saga The Corrections (2001), but I did read Freedom (2010), which was impressive. Crossroads is a massive novel, in terms of length but also thematically, covering religion, morality, trauma, drug addiction, mental illness and all the cultural baggage of the time, such as Vietnam and the counter-culture. Apparently it will be the first novel in a trilogy called 'A Key to all Mythologies', taken from George Eliot's Middlemarch (1871), being the academic work of Edward Casaubon, who is trying to link all mythologies to Christianity. The Hildebrandt family, apart from the youngest son, Judson, all feature prominently, with long sections dedicated to each in turn, focussing on their own particular struggles and world-view. Readers will have their favourites, and mine was Perry, a fourteen year old budding intellectual with narcissistic tendencies who becomes very dysfunctional indeed. Marion, the matriarch, is the queen of dysfunction, closely followed by her uptight and frustrated husband, Russ, who seethes with jealously toward a hip young minister, Rick Ambrose (Russ is a middle-aged minister at the first Reformed Church) and lusts after a beautiful younger widow, Frances. All have their moments in the literary sun throughout the novel, as do older siblings Clem and Becky. Franzen takes his time, giving his well fleshed out characters plenty of narrative space to deal with their issues. Ultimately it makes for compelling reading.

Crossroads is serious literary fiction and requires both concentration and dedication. Fortunately the novel is well worth the effort. The sentences are long, but not particularly showy, there's not much in the way of beauty here, but there is a great deal of psychological intensity in Franzen's prose, and that is something to both enjoy and admire. As with all great novel titles, Crossroads has multiple meanings, being the name of a Christian youth group that is at the centre of the novel, and where most of the protagonists find themselves at one point or another; it's also where American society finds itself as it begins to become more polarised and more secular. The world that Franzen builds is vivid, as are the struggles of the characters. Marion, in particular, is a traumatised and conflicted character, and the long section that delves into her past is disturbing and dark, so much so it's a relief to move onto the next chapter and another character. The age old problems of how to be virtuous and moral are explored via the struggles of multiple characters, but as Perry and Russ find out, easy answers are more often not forthcoming. Such universal themes are always fertile ground for novelists and Franzen certainly makes the most of it in Crossroads, so much so that at the end you are left wanting more. I'm hoping that the 'Key to all Mythologies' will be as rewarding as John Updike's epic Rabbit novels, that played out over decades (beginning in the sixties and ending in the naughties) and followed the same characters as they lived their very human lives. There's your challenge Jonathan Franzen, but I have no doubt that you are up to it, just don't take ten years to deliver the sequels, otherwise you will become Casaubon, which would be regrettable.