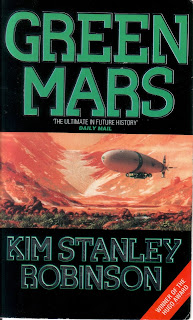 Yet another large novel, this one 780 pages of hard science fiction. Green Mars is set fifty years after the conclusion of Red Mars (1992), a science fiction novel I consider to one one of the best out there. Green Mars isn't quite up to the same standard, but it does come close. Mars has changed, terraforming has come a long way, with the atmosphere thickening and warming enough for genetically engineered plants and microorganisms to begin to flourish. The survivors of the first hundred are in hiding, mostly in a habitat under the South Pole. Most of the key characters from the first novel have survived, thanks to the longevity treatments developed in the first novel, which is great for continuity, but also not an impossible premise considering research into longevity has been going on for decades in what passes for reality. There's also a host of new characters, mostly offspring of the first hundred, known as the Nisei, bred by the mystic, Hiroko. In the same manner as the first novel Robinson gives large sections of the narrative over to different characters in turn, and it is through one of the Nisei, Nirgal, that the new Mars is revealed to the reader. The legendary stowaway, Coyote, takes Nirgal out onto the surface and introduces him to all of the secret underground communities. Mars exists in a tense split between the transnational corporations and the underground, who want to make Mars their own, away from the corrupt capitalism of Earth promoted by the transnationals.

As with Red Mars, this novel takes its time, giving you long descriptions of the geological landforms of Mars. To get the most out of the novel you must either be really into geology, or appreciate just how vivid Robinson's descriptions of Mars are, so vivid they give you a strong sense of really being there on the surface. Robinson makes it totally believable and even desirable that one day humans would be on Mars in a similar situation. Although there is plenty of focus on the planet itself, often the narrative leans toward the philosophical, scientific and the political. The characters are roughly grouped in this manner, with Hiroko and her followers espousing a profound sense of connection with the planet itself, viriditas. The magnificently named Saxifrage 'Sax' Russell continues his mission to terraform Mars, in fact he is perhaps the key character, an influential 'scientist as hero' (the title of part four in fact). Politics is everywhere throughout Green Mars, via the underground, Nirgal, Coyote and the intense Russian femme fatale, Maya Toitovna. Through Maya the physiological effects of the longevity treatment are explored, what it does to the psyche, the memory and perception, which is generally fascinating stuff. These are merely some of the many themes explored throughout the novel; Robinson really packs an enormous amount of information and detail within the 780 pages, it was almost an exhausting endeavour to get through, however it is well worth it and I'm looking forward to reading Blue Mars (1996) in the near future.