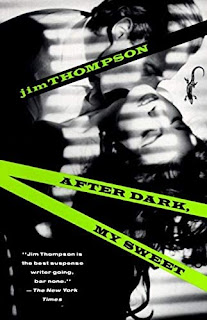 Crime is another genre, along with fantasy, that I haven't paid much attention to over the years. For some reason I'm being drawn to crime fiction now and mentioned it in passing to a good friend from Melbourne who then sent me four crime novels he had found in op-shops. Among them was After Dark, My Sweet, by one of the masters of crime noir from the mid twentieth century, Jim Thompson. The novel involves the sociopath, William Collins, former boxer and freshly escaped from a mental institution (his fourth), becoming involved with the alcoholic femme-fatale, Fay Anderson. William is recognised as the perfect fall-guy by Fay's crooked-cop associate, Uncle Bud, who between them have a scheme to kidnap the child of a wealthy family. Even a relative novice in the crime genre like me can recognise that the novel contains all of the typical tropes of crime noir. All of the characters are, in turn, brooding, unpredictable, scheming and violent. The atmosphere is bleak and desperate. The plot unfolds like a tense nightmare that is reasonably unpredictable, despite all the cliched crime tropes being present and correct.

Looking at Thompson's bibliography, he really pumped out the novels, publishing four in 1954 alone! A glance at Thompson's Wikipedia entry reveals the opinion that his output varied in quality, writing some novels in only a month. You can tell, as After Dark, My Sweet does not present as high quality writing, but it is not exactly pulp either. The novel is written in first person from the point of view of Collins, and so is coloured by his hard-man vernacular and distorted world view; so much so it's almost as if he wrote the novel himself. It took me a while to get used to and it doesn't help that there are barely any sympathetic characters throughout the novel. No one trusts each other, and this constant tension makes for a dark and nervous read. I wouldn't say reading After Dark, My Sweet was an enjoyable experience, but it was very interesting. I tried to imagine what it would have been like for readers in the mid-fifties being exposed to such sociopathic darkness, did they have more innocent exceptions back then and were they more easily affected by crime's dark underbelly? Perhaps not, but they might not have quite been used to Thompson's particular gritty, nihilistic style, something the modern reader is well used to by now. I may well read more of Thompson's work, after all he did write the script for Stanley Kubrick's film, The Killing (1956) and this novel did enough to interest me.