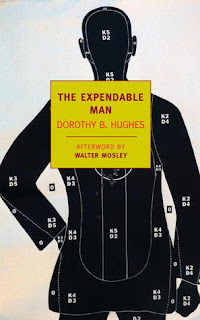 Another crime novel in quick succession, this one I found at the op-shop down the road from my library for a dollar. It's a beautiful New York Review of Books (NYRB) edition and as such is pretty much a guarantee of quality. Dorothy B. Hughes was a renowned crime writer, who wrote In a Lonely Place (1947), that became the basis of a successful film starring Humphrey Bogart. The Expendable Man was Hughs last novel and is regarded as one of her best. It is skilfully written, displaying a high literary quality without becoming stylistically over-bearing, which serves the plot and characters well. The main protagonist, Dr. Hugh Densmore, is introduced on the first page, as he drives his family's Cadillac from L.A. to Phoenix and picks up a young female hitch-hiker against his better judgement. The young woman, of course, goes on to cause Densmore a great deal of trouble, particularly after she is found dead in a canal. Densmore is the main suspect and much of the novel focusses on his efforts to both protect and clear his name. The Expendable Man is a compelling read and the tension builds nicely throughout. There are some cliched elements, like the character of Venner, a hard-man detective who sneers and slurs his speech in what is referred to as a 'pornographic' manner; and the red-neck elements working in the background to try and make sure that Densmore is framed for the murder. It's good to keep in mind, however, that at the time such tropes were not that over-done.

The novel is generally well-paced and the tension is only released in the last pages, which, when it comes, is a relief. Hughs was a clever writer and there's a moment about a third of the way through where, in one sentence, everything is turned on its head and the readers' perception of what is going on is completely changed. I almost gasped when I read the sentence and realised what had happened. There is evil in this novel, but it is not Densmore, rather it is institutionalised via the justice system and the moral standards of the era. The Expendable Man is an indictment of American society at the time and, although it's almost a cliche to say this now, could easily be freshly published today and be seen in the same light. This is noir crime fiction with a social conscience. Although the novel is genuinely excellent, and I did mostly enjoy it, it did leave me feeling slightly soiled by its atmosphere of desperation and deceit. Although I will be reading more crime novels in the future, I'm not sure I like the way they make me feel. At the library crime novels are the most heavily borrowed books and it is also the most successful fiction genre in the world, however it may turn out not to be for me in the end. Curiously the current novel I'm reading, The Little Friend by Donna Tartt (2002), involves both a crime and criminals, so I may be convinced yet.