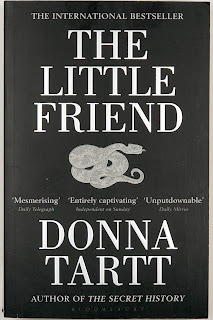 The Little Friend is an incredible novel, but before I get into just why I need to point out that this does not mean that everyone will enjoy it. The novel disappointed some of Tartt's many fans after the sublime The Secret History (1992), which is one of those special novels that are revered with a cultish intensity. A hard act to follow then, and it doesn't help that The Little Friend is a world away from the university setting of Tartt's debut. Also Tartt takes her time to set the scene, establish the characters and engage in some world building; for example, after the prologue, nothing much happens for fifty plus pages. We are introduced to the Dufersnes family, some twelve years after the nine year old Robin Cleve Dufresnes was found dead, hanging from a tree in the front yard. Among the ensemble of characters, including three aunts, parents, friends, housekeepers and pets, we meet Harriet Cleve Dufresnes and learn that the trauma of her brother's death has resulted in a sad and dysfunctional household. Initially it really seems that the novel just consists of endless dialogue and descriptions of domestic scenes, coupled with a slow pace. However, via the twelve year-old Harriet, who is intelligent, intense and wilful, you are drawn irresistibly into the decaying  small town gothic American south of the mid 1970's. Harriet becomes determined to find and punish whoever killed her brother, and thanks to information provided to her by the family's hard-done-by housekeeper, Ida, she fixates on local red-neck meth-head Danny Ratliff, whom, along with his brothers, are the toughest criminal element in town. Once Harriet and her only friend, Hely Hull, set out to track down Danny the novel really takes off, becoming totally absorbing and engaging. Of course, as with all great novels, you need the set-up for the pay-off to really work, so any requirement of patience and work on behalf of the reader is well worth it.

The Little Friend has been criticised for being something like a Nancy Drew mystery, but this is totally misguided criticism. The novel is very adult, incredibly compelling and the writing is absolutely brilliant. Tartt really is a superb writer of fiction and her descriptive powers are endlessly astounding. When Tartt sets a scene you are really there with the characters, who are all fully realised creations, including the many minor characters. I truly believe that Tartt is one of the most talented writers to ever put pen to paper (or fingers to the keyboard?). The tension that Tartt builds throughout the novel is almost unbearable, I had to keep putting the book down to take a break. On the other hand I have never laughed so spontaneously and so loud and long at a scene that involved a cobra, a skeletal old grandma called Gum and an open-top Trans Am, and the thing is, I'm not even sure if it was meant to funny! The novel is also very dark, filled with despair, malevolence, bathos and paranoia, playing out like a TV series made by David Lynch, but without the supernatural elements. There are also some of the most brilliant set pieces I've ever read, like when Hely eavesdrops on a tense scene in a seedy pool-hall and the intense scenes when Harriet and Hely break into a house containing boxes of poisonous snakes owned by a travelling snake-handling preacher. The Little Friend is filled with such moments, it was a novel I desperately wanted to get to the end of so I could find out what would happen, yet I also didn't want it to end because it was so enjoyable. It's an extremely clever novel in that it doesn't give up its secrets too easily, you need to wait till near the end to find out who the title refers to, and as for some of the other mysteries, I'm not saying anything lest I spoil things for new readers. Oh, and Donna Tartt, it's been nine years since your last novel was published, given your publishing record the new one must be due next year, I certainly hope so.