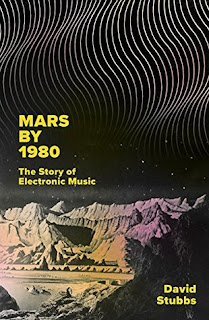 Mars by 1980 has been my book to read as I've been recovering from a hip replacement, and it's been exactly the right choice (you get good at this as you get older...). It's fascinating and well written, but not too demanding when the ability to concentrate is compromised. I do know and love a reasonable amount of electronic music, but this book has filled in many gaps in an engaging and interesting manner. In the preface Stubbs admits that the book is not an exhaustive history of the genre, which is just as well as it would have to have been an encyclopaedia, such is the genre's lengthy history and ubiquitous twenty first century presence. The genre's history begins in the late nineteenth century and early twentieth century, with the invention of such machines as the pianola (1895), and then the exotically named Telharmonium (1906) and the Intonarumori (1910). Part one was perhaps the most fascinating for me, going from the above mentioned inventions through to the pre WWI Futurists and then onto avant-garde electronic composers such as Edgard Varese, Pierre Schaffer, Stockhausen and John Cage. It was rewarding to read about these innovators and at the same time listen to their compositions via You Tube, a recommended approach for anyone wanting to read this book. Although overall the book is a linear history, Stubbs does jump back and forth in time a bit, which is fine. Stubbs also offers a somewhat personal and subjective perspective, recounting his initial exposure to electronic musical works, which proves to be an effective and engaging approach throughout.

Perhaps the real strength of Mars by 1980 is the quality of Stubbs' writing, which is witty, erudite and perceptive. There are never lulls or boring sections to contend with and Stubbs' subjective opinions are never intrusive or excessive in tone. Stubbs evades any criticism of not even trying to be comprehensive by making what he does cover really count. He gives in depth attention to black musical artists who were trailblazers, such as Sun Ra, Miles Davis and Stevie Wonder, as well as female artists, such as Delia Derbyshire and Daphne Oram, who worked at the BBC in the 1960's. Derbyshire produced the Dr Who theme, which became one of the most famous electronic works within mainstream awareness for quite a while. Perhaps the most enjoyable chapters for me personally were 'The Art of the Duo' and 'Substance', both of which covered electronic music in the 1980's when I was a teenager. So, a nice glow of nostalgia for me as I contended with getting my new hip into gear. Stubbs also examines ambient music, 1990's rave culture, the dominance of sampling and then EDM (electronic dance music) in the twenty first century. Along the way he deftly examines the push and pull between black and white music and the associated question of authenticity, such as when white artists become funky by sampling the work of black artists (hello Moby). Mars by 1980 is much more than just a selective overview of electronic music, it also stands as an almost anthropological examination of twentieth century culture, which, in doing so, strongly gives the impression that the invention of machines that allowed humans to compose electronic music was a highly significant development in human artistic endeavour. Recommended for music lovers who are both curious and adventurous, and really, why not be both?