Lives of The Stoics: The Art of Living from Zeno to Marcus Aurelius - Ryan Holiday and Stephen Hanselman (2020) 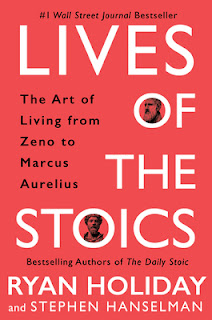 I bought this book at the beginning of my three weeks off of work in April before I had my hip replacement. It caught my eye because I've always been interested in Stoicism and also I felt that a certain degree of stoicism got me through the one year wait I had to endure to have the surgery. There is, of course, much more to Stoicism than just being resilient and happy despite one's circumstances. There are ethical considerations, along with justice, virtue and the use of logic free of subjective bias. A principle aim of Stoicism is to be free of the baser elements of human emotion, such as envy, jealousy, anger and to work hard toward one's betterment and the betterment of others. The Lives of the Stoics doesn't exactly explain stoicism in such simple terms, rather it illustrates the tenets of Stoicism via the lives of its exponents in the ancient world. Stoicism began in Ancient Greece in the third century BCE when Zeno the Prophet arrived in Athens, poor and down on his luck after losing everything in a maritime Mediterranean storm. Zeno's story here is merely the beginning of Stoicism as a philosophical movement, which then unfolds chronologically over the course three hundred plus pages, many centuries and dozens of historical figures.

The early Stoics hailed from or ended up in Athens. Due to the historical era not that much is known about some of the early Stoics and some entries are either short and/or read as if there is a lot of supposition involved. Things eventually become a lot more interesting with the advent of the Roman Stoics. Greek Stoics, such as Antipater the Ethicist and Panaetius the Connector, would spend time in Rome during the second century BCE, influencing the Romans and leading to such famous Roman historical figures as Cicero, Cato, Seneca and finally, Marcus Aurelius, whom is famous for his written works entitled Meditations (161 - 180 ACE). These are fascinating historical figures and Holiday and Hanselman do quite a good job of relating their historical footprint through the prism of Stoicism. It's interesting and fascinating, but unfortunately not often compelling (but, should it be?). Fortunately due to the book's format the reader can read about one Stoic at a time, usually over about twenty pages or so (the book also features a handy map and a timeline). This is how I approached reading Lives of the Stoics and in-between I started to look more into the period of history each Stoic hailed from and in the end my interest in ancient history was rekindled and I started to read a book from my library discard stash on the Roman Republic (more about that later). Once I started reading Rubicon by Tom Holland (2003) along with Lives of the Stoics, it become a much more vibrant read. Although you have to work to pick out Stoic philosophy out of the stories of its practitioners, I do feel like I have a greater appreciation of Stoicism. To get the best out of this book I recommend my approach of reading it in conjunction with some wider research of both Stoicism and of the ancient historical era.