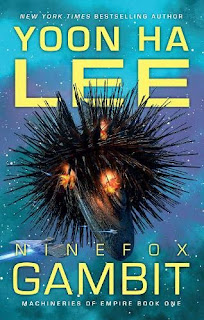 I bought this book on a whim, mainly because I thought it was Chinese science fiction, but Lee is actually an American, however, despite my admittedly rather limited exposure to Chinese science fiction, Lee does display some stylistic similarities to some of the Chinese writers I've encountered. There's a certain formal tone to the writing, which has both advantages and disadvantages. The formal tone suits militaristic science fiction, with its array of exotic weapons (amputation guns and something sinister and powerful known as a Winnower, are two of many examples) and space battles, which can be difficult to get right, but Lee does well here. However it's not so good with character development, leaving many of the characters as two-dimensional actors in settings dominated by military technology and imperialist ideology. The two main protagonists, captain Kel Cheris and the 'undead' mad and traitorous Shuos Jedao, have some depth to them, particularly as their circumstances allow for some pretty dark psychological intensity, but all the other characters are one dimensional or impenetrable. The novel became less satisfying as it progressed. In fact I became indifferent throughout the last third and just wanted to finish so I could move onto another book, which is never a good sign.

Despite the novel's flaws the concepts found within Ninefox Gambit are intriguing. There's a struggle between a despotic space Empire called the Hexarchate and other groups that are under its control, who have a tendency to become 'heretics' and develop alternate ways of living. This is were it gets really interesting - civilisation, and objective reality itself, is maintained and altered by the development and establishment of calendrical mathematics. The Hexarchate is run by a strict calendar that all disparate parts of the empire must adhere to, otherwise reality itself can change in ways that undermine its function. It's a great concept and I also enjoyed the fact that Lee throws you in the deep end from the first page and it takes quite a while to work out what is going on. Ninefox Gambit is the first novel of the Machineries of Empire trilogy. The combination of Lee's ideas, space opera tropes and mathematic concepts make the novel and the trilogy an intriguing proposition, however because Lee's style left me cold it is likely that I will not read the other two novels, Raven Stratagem (2017) and Revenent Gun (2018). Other's may find Ninefox Gambit totally satisfying, so don't be necessarily put off by my reaction to Lee's writing. The novel won the Locus Award for best first novel and was shortlisted for the Nebula Award, so I may well be in the minority.