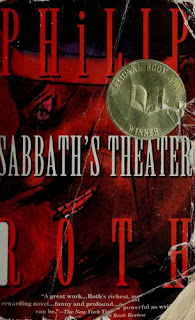 My first Roth novel, finally. It didn't disappoint either, although at times it was too much to handle. Excessive is a suitable adjective to describe Sabbath's Theater, a novel dominated by the grotesque, yet strangely sympathetic character of Micky Sabbath. Sabbath is a sixty-four year old ex-puppeteer, at the tail end of a life dedicated to sexual debauchery. This is an outrageously dirty novel, full of lusty sexual proclivities that often veer into taboo territory, or at the very least into the realm of perverse transgressions. It's heady stuff, not least because of Roth's intensely verbose and dense prose style. Obviously seasoned Roth readers would be familiar with his dark rococo narrative style which manages to be both digressive and startlingly direct at the same time, but for yours truly, a first time reader, it was overwhelming. At times I found the novel to be impenetrable, then intensely entertaining, and then boring and indulgent, sometimes within a few pages. Ultimately, however, I couldn't help but be drawn into Sabbath's self destructive raging against the dying light of what it is to be a lusty heterosexual man, although one who has a very dodgy moral compass.

At some point I wondered just why Roth would have created a character such as Sabbath. Then I realised that he represents the primal sexual urge inside every man, no matter how conservative or repressed he may be, an urge that is both monstrous, but perfectly natural in essence? Perhaps.... As with Charles Bukowski's work, I wonder how women feel about Sabbath's Theater? Or Roth's writing in general? Roth is just as funny as Bukowski. Humour in literary fiction is difficult to pull off effectively, but here Roth excels, so much so my partner would often ask me what I was laughing about (I would get her to read some of the lines, which didn't have the same effect on her, perhaps answering my above question, although she does appreciate Bukowski). There's some incredibly funny scenes, such as when Sabbath places bets on an AA patient's blood-pressure, or his perverse adventures at his former producers' apartment, revealing himself to he the ultimate bad guest. Although sometimes Roth was totally over the top stylistically I will certainly read some more of his novels, including the infamous Portnoy's Complaint (1969), which I have an original hardback edition knocking about the house.