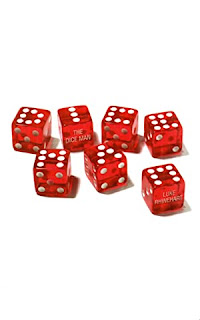 The Dice Man is perhaps one of the most famous cult novels of all time. By the time I was a teenager in the 1980s I'd heard of it, even though I knew no one who had actually read it. Just hearing about the concept was enough to get the imagination going. Now that I've finally read the novel I realise just how influential it was. I detect its influence on writers such as Chuck Palahniuk and Bret Easton Ellis, for example. Certainly the protagonist, also called Luke Rhinehart, reminds me of a toned down Patrick Bateman from American Psycho (1991). Although Rhinehart is not as an extreme a character as Bateman, he does appear to embody the disaffection and ennui at the heart of the middle-class professional in mid to late century America. The novel begins with Rhinehart despairing about his outwardly perfect life; with a wife, two children and a career as a notable psychiatrist (as was the author himself, geddit?). At this point the prose seems a touch self conscious and I was thinking that the novel was going to be an ordeal, however quite quickly, at the throw of a die, no less, it became fascinating, fun and outrageous. Rhinehart becomes a compelling character, one whom you want to follow down the 'liberating' path of putting the course of your life in the die's hands. The tone of the novel is one of revolutionary fervour, in keeping with the times it was written and published in, but it is also an irreverent ride into the sunset, not caring where it ends up.

The Dice Man is a touch dated, I can imagine that it would have been recommended by Playboy to its readers back in the day. One could argue that it is misogynous, as the female characters are usually willing to indulge sexually when Rhinehart is around, particularly when the roll of the die orders him to rape and pillage. It's certainly misanthropic, almost bitterly so at times. There's also increasing references to the 'The Book of the Die', as Rhinehart's notoriety increases and his adherents increase in number. The point the author is making about religion and cults appears obvious, that they are inherently absurd, as is human nature and existence it seems. Rhinehart doesn't hold back, but there's also plenty of humour, some of the funniest scenes are those that satirise psychiatrists and psychiatry itself. There's also some fantastic episodes involving mental patients that are disturbingly hilarious. The novel does become darker as it progresses and one wonders where it will end up. The answer is with two disturbing episodes and then a set-up for the sequel, which was a bit disappointing, but understandable. From what I've read Rhinehart diluted the impact of this novel with each sequel, but he's hardly the only one to fall into that trap. What fascinates me is that I've met several older people, some library patrons, who experimented with a die rolling lifestyle due to reading the novel, mostly with inconsequential results. I did hear about one instance in which a decision to engage in an affair due to the roll of a die blighted decades of a marriage. What a curious afterlife this novel has had. I recommend reading it not just because it is ultimetly a fine piece of writing, but also for its cultural significance.