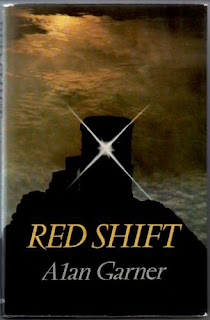 Alan Garner is a relative of my family on my mother's side, and when my mother and I travelled to England in 1980 when I was 11 we went to the area known as Alderley Edge in Cheshire, where Garner had grown up and had set many of his fantasy novels. Alderley Edge features a hilly wooded area (The Edge) which has ancient mystical traditions involving an army of knights who sleep under The Edge, guarded by a wizard. Consulting Wikipedia reveals that the carving of the face of a wizard over a well in The Edge, that I distinctly remember seeing, was carved by Garner's great great grandfather in the mid nineteenth century. Talk about getting your imagination going! I didn't meet Garner on that visit, perhaps because by that point relations were distant, but my mother bought me all of his books, including Red Shift. I read the others, including his first, The Weirdstone of Brisingamen (1960), but not Red Shift, which has been in my possession for forty two years! It had been too adult for me at the time. Supposedly a young adult novel, it in fact reads as a complex work of high modernism. Set in three time periods, the first during modern times (the 1960s I assume), Roman Britain and during the English Civil War (1642 - 1651). The narrative alternates between the three, often without much warning. All three time periods are set in the region around Alderley Edge, mostly to its south in Barthomley and a place called Mow Cop (I checked on Google Maps). The novel is thematically dense, almost to a gnomic degree, although at its heart is a love story. I deliberately did not look up any explanations of its plot and themes, but now that I have it does make much more sense. However I'm pleased that I read it without guidance, as I feel that it is a work that you need to interpret yourself.

Although Red Shift is wilfully opaque, it features some beautiful prose which, although simple at times, flows along at a pace of its own devising, including some dialogue-heavy passages that sometimes just consist of one word exchanges, particularly in the modern parts. In this regard the narrative is stripped back to its bare-bones in these sections, perhaps reflecting the character's difficulties in truly connecting? Despite this there's enough there in the narrative to latch onto. There's three different love stories, interconnected through place, but separated through time. A stone axe also seems to link the three stories, with it ending up being found by the modern day semi-estranged couple, Tom and Jan. This couple and their circumstances give the reader a narrative anchor from which the other two time-lines are better absorbed, as often it is hard to fathom what is going on during these parts of the novel. The colour red is a thematic link also, with the stone axe being coloured with red ochre (and blood, I assume), red painted faces appear during Roman Britain and Tom alludes to the red shift of galaxies as they recede ever away from our own galaxy. I assume that this is also a metaphor for his alienated mental and emotional state, particularly toward his parents and, to a lesser degree, Jan. Like many modernist texts, it's best to just flow with the narrative, allowing certain themes and plot devices to penetrate. It's a novel that would benefit from multiple readings. If you really want to know what is going on, the previously mentioned Wikipedia entry is long and informative. I'm amazed that Red Shift was marketed to young readers, but perhaps they were more sophisticated in the early 1970's? Overall it's a difficult, but strangely enjoyable novel, manifesting like a mysterious dream that you enjoy during the night, but can't make sense of the next day, and to me, that is a good thing.
Posted by Jeremy at 05:51