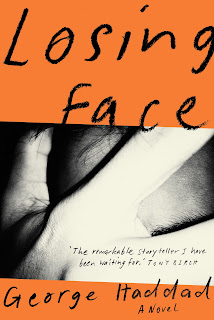 The first book club read of the year, and it is a doozy. Losing Face is George Haddad's first full length novel and it is superb. Firstly, Haddad's prose style is snappy and authentic, he hasn't tried anything too stylistically audacious, and the novel is all the better for it. The narrative is well constructed and deals with such weighty themes as rape culture, toxic masculinity, failure to launch, the nature of friendship and generational dysfunction and trauma. If it all sounds bleak, well perhaps it is to a degree, but Haddad writes so well that the story is absorbing and is therefore a pleasure to read. The main protagonist, Joey Harb, is a nineteen-year old lost in Sydney's western suburbs, barely holding down a job at Woolworths and hanging with his best mates, Kyri and Emma and also an assortment of fuck-ups content to put life on the back-burner in order to chase the next high. There's Joey's extended family, his mother Amal, brother Alex and, most significantly his grandmother, Elaine, who is an important character in her own right. All of the characters are totally authentic, it's as if you are there among them, part of the family, or out of it on drugs at a dance festival. Haddad gets the dialogue totally right, in particular the interactions between Elaine and her Lebanese friends and between Joey and his mates, forever on their phones and using slang to express their inarticulate trains of thought.

The reader gets to know Joey quite readily, which makes his inevitable descent into a terrible situation an ever present threat. When this part of the book begins the dread is palpable. The sexual assault scenes are brilliantly written, being both too much to bear and unputdownable. Joey's life is forever changed due to his naiveté and lack of awareness of the severity of the situation he finds himself in. The aftermath is compelling in its inevitably. Haddad cleverly weaves many shades of grey into the narrative, both in terms of Joey's situation and that of his grandmother's, Elaine, who has her own dysfunctions to deal with. The court scenes are mainly told through her eyes, adding layers of pathos to an unfortunately familiar tragic story. Most impressive is the denouement, in which Joey still finds it hard to find a way forward beyond the kind of aimlessness and lifestyle that endangered him in the first place. There's a path to redemption, but it's uncertain. Losing Face should be read by all of the Joey's out there, but they'd never read such a novel. Perhaps Losing Face should be part of the school curriculum, it would be a challenging but worthwhile read for teenagers growing up in the me-too era.