The Demon Haunted World: Science as a Candle in the Dark - Carl Sagan (1996)

Carl Sagan was one of a select group of scientists who could successfully communicate complex scientific notions to laypersons. Sagan was an important cosmologist and astrophysicist, but it is his popular science books and documentary television series Cosmos (1980) that will be remembered by the general population. The Demon Haunted World was his last published work before his untimely death in 1996. I remember that my reaction to his death was one of sadness and but also of appreciation. Sagan achieved a great deal while he was alive and in doing so influenced me greatly in my outlook on life and my understanding of the universe.

In the preface to The Demon Haunted World, entitled ‘My teachers’, Sagan talks about how much his parents taught and encouraged him even though they were laypeople with no knowledge of science. They supported his dream to be an astronomer and inspired him with their down to earth skepticism and sense of wonder. Sagan did a similar thing for me when I watched Cosmos at the impressionable age of ten. Cosmos inspired me and nurtured my fascination with astronomy and the world around me, something that, like Sagan, was supported by my parents. In the latter chapters of The Demon Haunted World Sagan talks about the importance of not only education, but of having books in the home; something that is essential to providing that ‘candle in the dark’, keeping spurious pseudo-science and superstition at bay. As a librarian I greatly appreciate Sagan’s stance. As a society we must never lose sight of the importance of providing egalitarian access to books and information, in particular for the young.

Throughout the main body of The Demon Haunted World Sagan’s debunking of pseudoscience is eloquent and, for the most part, compelling. Many of the initial chapters concentrate on UFOs and alien abduction; in particular the typical UFO stories and the so called face of Mars. The publication of The Demon Haunted World coincided with the era of The X-Files and a plethora of pre-millennial conspiracy theories. Once again there is a personal connection here for me, having been a UFO and alien obsessive during my childhood in the 1970‘s. Spurred on by UFO and alien books and classic 1970’s movies such as E.T, Close Encounters of the Third Kind and 2001 A Space Odyssey, like Mulder I wanted to believe. I even had my own strong memory of seeing a large white cigar shaped UFO hovering over my neighbor’s backyard that I’m sure was real, but would have just been a dream (I dreamt about UFO’s constantly). Curiously one of the scientific explanations for alien visitations and abductions that Sagan puts forward is sleep paralysis, something I experienced during my teenage years, although I didn’t see aliens (what I did see is another story).

The Demon Haunted World is a fascinating read, but can also be a sobering one. Sagan’s passionate argument for a better educated population is profound  and important. Sagan reminds us that it is essential to know something of logic and science (amongst other subjects) in order to make sound decisions. Unfortunately the statistics Sagan quotes regarding knowledge, beliefs and education in his home country of America is truly appalling. Only 9% of Americans accept that humans evolved; half of Americans do not know that the Earth orbits the Sun in a year and 63 % of American adults think that humans lived alongside dinosaurs. These statistics are from the 1990’s; would they have improved in the last twenty years or so? Unfortunately I doubt it.

Nearly twenty years after the publication of The Demon Haunted World Sagan’s argument against blind belief and pseudo-science is more important than ever. When it comes to the pressing issue of climate change humanity is at the crossroads and climate change deniers around the world, including the Abbott led conservative government here in Australia (perhaps the worst offenders of all), could benefit from reading this book. Science is under attack more than ever by non-scientists with dubious agendas and flawed belief systems who portray science and scientists as untrustworthy. The great irony, as Sagan shows, is that scientists go to extreme lengths to make sure that their findings are as accurate as they can possibly be and therefore, by extension, their conclusions too. When it comes to climate change it seems that we still do live in a demon haunted world.

Finally, perhaps the best thing about reading The Demon Haunted World was discovering that Sagan and I shared a very similar outlook toward science. Sagan states early on that: “In its encounter with nature, science invariably elicits a sense of reverence and awe. The very act of of understanding is a celebration of joining, merging, even on a very modest scale, with the magnificence of the Cosmos.” Science and a sense of wonder, even a sense of mysticism, are not mutually exclusive. Science is not merely cold reductionism, but provides a deep understanding of the magnificence of the cosmos and therefore of human existence itself. 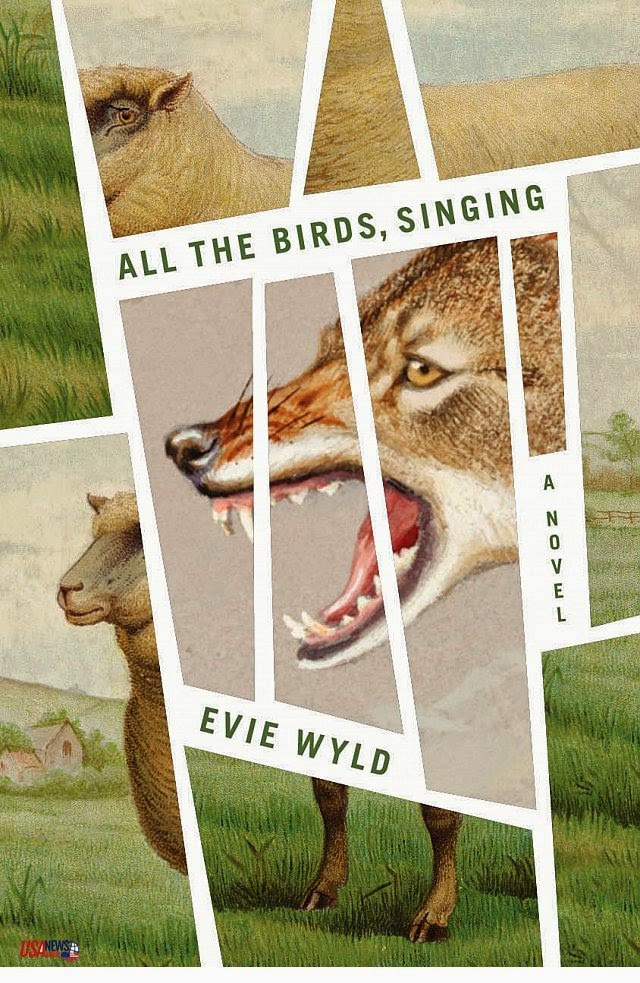 The day after I finished Evie Wyld’s All the Birds, Singing it was announced that the novel had won the coveted Miles Franklin Award. I had been reading the novel for the library book club and I wondered what the members would make of both the book and the fact that it had won the prize. I must admit that the novel left me cold. It also made me, once again, ponder the nature of awards and how judges decide that a particular novel deserves to win; just how much of the decision making is based on objective criteria and how much is subjective opinion?

All the Birds, Singing is a dark tale that explores trauma and its aftermath. Protagonist Jake Whyte (no, not Jack White) is a young woman who is basically just trying to survive. All the Birds, Singing tells Jake’s tale of woe via alternate chapters, with one stream set on an island off the coast of the United Kingdom that moves forward in time and the other set in Western Australia that moves backwards in time, ultimately taking the reader back to the source of Jake’s trauma. This fragmented structure allows Wyld to build tension by drip-feeding information about Jake and her past. In the chapters set on the island Jake runs a sheep farm and some of her sheep are being mysteriously killed by something or someone lurking in the surrounding woods. The palpable sense of horror generated by the mystery of the sheep killings has psychological parallels in the chapters set in Australia, with the mystery of the traumatic horrors of Jake’s past.

Unfortunately Wyld’s ability to generate genuine suspense is undermined by Jake’s one dimensional presence throughout the narrative. This is, ironically, due to Wyld's use of fragmented structure, which keeps Jake trapped in her traumatized funk for most of the novel. After a while this state of suspension become an irritant. The fact that I did not warm to Jake at all meant that I found it difficult to connect with the novel and when I did it was only for fleeting periods. When discussing All the Birds, Singing with my fellow book club members I discovered that I’d entirely missed various subtexts lurking in the plot. I just wasn’t motivated enough to notice. Also I realised that despite The Luminaries (2013) being over 800 pages long I had not once thought to myself ‘when is this going to end?’ I found myself doing this many times whilst reading All the Birds, Singing, despite the fact that it is at least a third smaller.

Half of the thirty book club members hated the novel and the other half enjoyed it, but thought that it was an average example of literary fiction; I was somewhere in-between. Despite many being disappointed with the ending, which to some was open-ended and overly ambiguous, I felt that it was poignant and pointed towards redemption for both Jake and the mysterious Lloyd, a sympathetic character who had turned up on her farm with his own murky past to deal with. So the novel is not without its merits, but should it have won the Miles Franklin award, beating the likes of Tim Winton, Richard Flanagan and Alexis Wright? Perhaps it was the fusion of form and theme that appealed to the judges, or the portrayal of a female character who was both strong and damaged. When it comes to assessing the short listed novels how much objectivity comes into play? How subjective are the judges allowed to be? That’s something I’d love to know. If I were a judge I would have concluded that All the Birds, Singing was not good enough in both objective and subjective terms to win the award. Sorry Evie, I know you would have worked hard on All the Birds, Singing, but in the end all I can say is that it just wasn’t for me.
Posted by Jeremy at 22:21 2 comments: