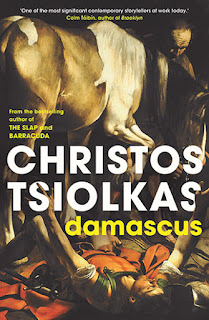 Although I've only read two of his novels (the other being The Slap (2008)), I'm convinced that Tsiolkas will go down as one of Australia's greatest writers. There are many reasons, but the main one is that he bridges the gap between popular fiction and literary fiction, therefore introducing more mainstream readers to accessible, yet complex themes, coupled with his almost brutal narrative style that leaves the reader nowhere to hide. Damascus takes on the first ninety years after the death of Jesus in a manner that both attracts and repels, depicting the cruel world of the Roman occupation of the Middle East and the troubled mind of Paul, both before and after his conversion on the road to Damascus. Typically for historical fiction the 'truth' is bent and warped to fit prevalent themes, predominantly a realist depiction of the times; with Tsiolkas almost completely sidelining the 'supernatural' events on the road to Damascus, instead focussing on Paul's sexuality (he wrestles with homosexuality) and the notion that Jesus was actually just an outspoken and rebellious Jew who inspired a religion that is often referred to disdainfully as a death cult.

One of the most striking aspects of the novel is the insight gained into how the poor quality of life for anyone who wasn't a Roman or, to a lesser extent, a Jew, would have made a new religious movement that proclaimed that all are equal in the eyes of God a highly attractive notion. The novel begins with the stoning of a young women, then goes on to depict the lives of slaves, male and female prostitutes, the poor, women who are forced to abandon their unwanted baby girls to the elements and the early adherents of Christianity, who were cruelly killed and tortured by the Romans. It's gruesome, stirring stuff and also utterly compelling. Perhaps my favourite section ( the novel is fragmented through time, sometimes jumping decades) is Faith, which is narrated from the first-person point of view of a Roman soldier called Vrasas. This section opens with the bloody rush of stream of consciousness narrative as Vrasas and his companions are covered in the blood and guts of a sacrificial bull. Through Vrasas the reader is emerged fully in the pagan Roman world and experiences first hand its disdainful attitude toward the strange beliefs of the Christians in their midst.

I wonder just how dedicated Christians may view the more controversial aspects of Damascus. Paul is homosexual and has doubts about his version of Christianity even many years after his conversion. Tsiolkas includes Thomas as the twin brother of Jesus, a twin brother who advocates a much different version of the Christian faith than Paul's, which came to dominate, resulting in the version we still have (to endure) today. Thomas denies the resurrection, instead seeing it as symbolic of the renewal that comes with spring; he believes that the kingdom of God is already here on Earth and talks about he and Jesus loving being on the road, where Jesus could be away from all the responsibilities that await him in Jerusalem. Within Tsiolkas' own struggle with the faith he was brought up with he's written a brilliant novel that not only gives a realistic depiction of the first century of Christendom, but also provides a narrative that is deeply thought-provoking and moving, something that is sorely needed in popular fiction. 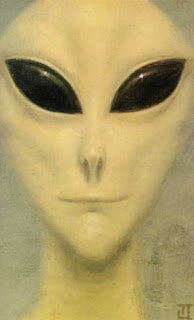 When I was a child in the 1970's I was obsessed with UFOs and aliens. I'd have dreams that featured seeing the night sky filled with alien spacecraft, including one in which a bright white cigar shaped UFO hovered over my backyard. I was taken to see Close Encounters of the Third Kind (1977) by my father, which both fascinated and freaked me out. I remember when Communion was published and seeing it on the shelves gave me the creeps, even though I was older (17-18) and my perception of the UFO phenomenon had changed. In my adult life I've read a lot of science fiction and books on cosmology, astronomy and physics and I've given the possibility of advanced alien life a great deal of thought. I'm sure it's out there, somewhere; but the universe is so massive and space/time so difficult to traverse that the question of whether alien life has visited Earth is, for me, mostly tinged with scepticism, which is how I approached reading this book.

Initially Communion is very convincing. Strieber outlines his emergent memories when he is prompted by his increasing paranoia and other psychological disturbances to seek help and undergo hypnosis. His memories of being visited by the aliens in his country home and his experiences on their space-craft is genuinely creepy. Strieber's musings about just who these creatures are, their possible influence on humanity, their motivations and his own philosophical position on the phenomenon is interesting and sometimes even compelling. However as the book progressed through his childhood memories, his family's recollections and finally Strieber's thoughts about the possible mystical influences of the alien creatures (revolving around triads) it became less interesting and even laughable. Aside from being a sceptic I approached reading the book in an anthropological manner because I've long thought that the UFO/alien phenomenon is tied to humanity's need for the 'other'; the strange, half seen creatures that inhabit our imaginations that used to manifest as fairy creatures but now, with the advent of the technological age post WWII, manifest as aliens. Were Strieber's experiences a manifestation of an inherent need for the 'other', something beyond ourselves that therefore defines who we actually are? Possibly, but in any case it was nice to read the book that introduced many of the alien abduction tropes into popular culture pre The X Files (1993-2018), but other than that I remain both unimpressed and sceptical.