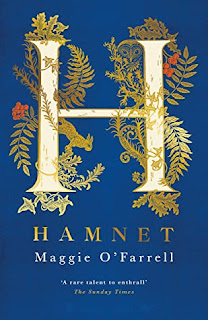 Shakespeare is always a fascinating writer to ponder, considering his literary legacy coupled with how little is known about him, something that has left plenty of room for the various conspiracy theories concerning whether it was someone else who wrote all of those amazing plays. Fortunately O'Farrell is no conspiracy theorist, rather she has written an interesting novel around what little is known about Shakespeare's son, Hamnet, whom died at the age of 11 from unknown causes. O'Farrell, appropriately for our times, depicts that it was from the bubonic plague. Despite the title of the book and Shakespeare looming large, the novel's main focus is Agnes (Anne Hathaway), her life and how she deals with the death of Hamnet and the absence of her playwright husband in London. Shakespeare himself is never referred to by his name and is given very little agency in the narrative, a bold move that mostly works, however the novel often becomes much more vital when he is around.

I struggled with Hamnet. Initially I was drawn in by O'Farrell's sumptuous style and fine descriptive powers, but as the novel progressed I became much less engaged. I came to the conclusion that although the novel was a fine piece of work, it just wasn't for me, yet I had to read it for the library's book club. This disinterest unfortunately highlighted the novel's flaws, rather than its strengths. O'Farrell goes to great lengths to give Agnes a fully rounded character and a determined agency over her world, which is absolutely valid, however at times this came across as forced and unnecessarily mystical in nature (Agnes is depicted as having prophetic and intuitive powers). Often scenes that were meant to be poignant dragged due to excessive detail and repetitious interior monologues (Agnes). Ultimately I found Hamnet to be rather dull, only engaging my full interest for short periods. To be fair, O'Farrell has fashioned a fine novel, including an engaging section describing the journey of a flea that brought the plague to Stratford and an emotionally resonate final section that revealed just how Shakespeare may have coped with the passing of his only son. Hamnet is worth your time if you love historical fiction that effectively evokes its times and gives flesh to little known characters, so don't necessarily be put off by my lukewarm response, read it and decide for yourself.

Tomorrows vs Yesterdays: Conversations in Defence of the Future - edited by Andrew Keen (2020) 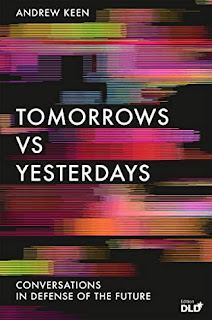 Tomorrows vs Yesterdays is the kind of book that needs to be read in the year that it was published, not because it might be prescient, but because the issues it discusses are absolutely pertinent right now. Essentially the thinkers interviewed by Andrew Keen are considering such issues as economic inequality, social media, the crisis of democracy and AI. The book is divided up into four sections: The Crisis, Waking Up from Utopia, Democracy and the Digital Revolution and Fixing the Future. Tomorrows vs Yesterdays is undoubtably an important book, but it is also a convenient way to gain quick insight into these important issues from thinkers whom have published books on the subjects without having the read those books. The interviewees are loosely divided up into those who think that things should be wound back and somehow reset and those who believe that we should find ways of working with the various drivers of current trends that are taking us into an increasingly bleak and uncertain future. Keen is a fine interviewer and overall the book is engaging, but despite the cautious optimism of those in the future camp I finished it still feeling pessimistic about the future.

Tomorrows vs Yesterdays is a hard book to give an overview of, as there are so many ideas discussed, so I'll pick one interviewee from each section in the order they are listed above. Shoshana Zuboff published the book The Age of Surveillance Capitalism (2018) and the issues she discusses makes for somber reading; such as the constant data mining of everything we do online and also via CCTV by the likes of Google and Facebook etc that is used to manipulate us and sell us consumer goods. David Kirkpatrick published a book called The Facebook Effect in 2010 that was mostly optimistic about the social media platform, however within the last decade he has changed his mind, strongly criticising Facebook's strong reluctance to regulate abuse of its services as well as its ruthless pursuit of user data for profit. Peter Pomerantsev wrote a book called This is Not Propaganda: Adventures in the War Against Reality (2019) and he talks about the abasement of social media and the net in general by right-wing propaganda, something Trump and his allies have excelled at in the most evil and insidieous way possible. In the fourth section the likes of Richard Stengel, author of Information Wars (2019), cites strong regulation of the online environment and the use of the likes of Facebook to educate, rather than spread disinformation and exploit our data. As I've already mentioned, I'm not optimistic! If you want a well put together heads up regarding these issues and more, then this book is up to the task, but if you want to avoid being further depressed about the state of our world then spend the money on a good bottle of wine instead (I did both...).